Readers of The Bridge World will already be familiar with the acerbic Chthonic, the self-confessed world’s greatest bridge player. Fifteen of the 21 stories in this delightful book previously appeared in its pages; the other six are new.

In his Foreword to the book, Jeff Rubens professes that for him, “… the holy grail consists of humorous pieces that meet the exacting general standards that readers demand of the magazine’s articles: technically sound bidding and play, deals of interest to accomplished or improving players, and a high ratio of bridge to total content.”

Despite stiff competition, The Principle of Restricted Talent was a clear winner in our jury’s collective opinion. The bridge deals are intriguing and the witty dialogue brings to mind another great book from 1976, Bridge with a Perfect Partner by PF Saunders.

This is how The Bridge World  explains who is Chthonic : “The current card-playing capability of software is so low compared to that of humans that bridge-playing computers are mostly a subject of ridicule. However, we are all in awe of Chthonic (the first two letters are silent), the creation of the Orttman Foundation, a machine with superb technique, high talent for imitation, and personality traits that compete with the very worst homo sapiens have to offer. Below, one of his escapades.” 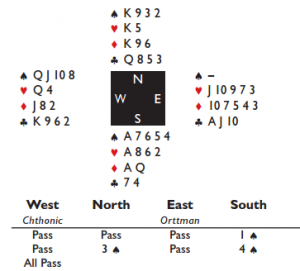 “We were trailing by 4 IMPs with this board to play. Birdsworth and Barton no doubt had a sub-par session in the Closed Room. Our opponents bid uncontested to Four Spades, which of course has no play on a club lead. Yet, through inexcusable carelessness, Chthonic nearly allowed the contract to make!”

The opening lead was the club deuce. Declarer followed twice as I took the ten and the ace, then he ruffed the third round. To my horror, Chthonic carelessly followed to this trick with the king!”

“Fortunately, declarer had no loser to discard on dummy’s established queen, so the error could not cost. Not so his second mistake.When declarer led a spade to dummy at trick four, the robot unthinkingly followed small!” Orttman paused for a few seconds to let the magnitude of Chthonic’s gaffe sink in.

Marty stared at the diagram in amazement. “Holy cow,” she finally said. “That’s incredible. I…I can’t believe he did that!”

“My sentiments exactly,” said Dr. O., happy to have salvaged a little satisfaction from his trip to the basement. “Even a beginner would know to split his honors in this elementary situation. I need not mention that if declarer had thought to insert dummy’s nine, we would have been knocked out of the tournament. Thankfully, however, he made the routine play of the king and so went down one trick.” “Chthonic, true to form, refused to acknowledge his errors in the post-mortem.”

(From the BBO transcript …

Chthonic:“Well, Frederick, despite your best efforts I see we have won the match by 6 IMPs.”

DrFooPhD:“Bah! I hope you realize how close we came to defeat.”

Chthonic: “Indeed. Had you chosen to sit West instead of East we would have lost one IMP on the final board, instead of gaining ten. I am confident you would have devised a line of defense to allow an overtrick. Let us hope you perform as admirably when selecting your seat next Tuesday.)” …

“What card did Chthonic play at trick two?” she asked.

“That is totally irrelevant.”

“No, really sir. It’s very important. Which club spot did he play?”

“I thought so,” she said with a nod. “Sir, Chthonic defended this hand perfectly. If he had played a different card to any of the first four tricks, declarer would have made the contract!” ”

Balderdash! Declarer has four certain losers on a club lead.”

“No, sir. Watch” She began crossing off cards from the diagram. (If West follows low on the second and third clubs and splits his honours in spades to deny South the safety play in trumps, declarer strips West of minor-suit cards to reach): 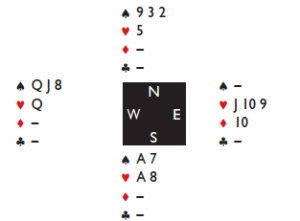 “Declarer needs three more tricks. At trick ten he cashes the ace of hearts, and West has to follow suit. Now South leads his last heart. If West ruffs low he gets overruffed, and if he ruffs high he’s end-played.” “The bottom line is that if Chthonic splits his honours at trick four, he’s toast. He has to play low smoothly, and he also needs to have falsecarded in clubs so that declarer won’t risk the safety play. Pretty cool defense,” she concluded. Well.

Orttman opened his mouth, closed it, and opened it again, all the while waving his hands jerkily in the air. He looked like a mime doing the soliloquy from Hamlet.

A Long Dummy Suit Shouldn’t be Ignored by C. Goren

Defensive Player Should Attempt to Visualize What Partner Holds

10th January 2018
X
We use cookies to ensure that we give you the best experience on our website. If you continue to use this site we will assume that you are happy with it.Ok