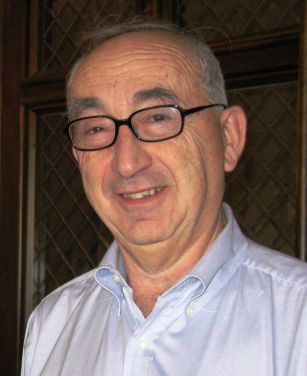 Canadian Bridge Federation: George Retek, “who has served as a member of the WBF executive council for 23 years, is the only Canadian member of the WBF Committee of Honour, the highest honour that the WBF bestows on a member. He brought the world championships to Montreal in 2002, and served as chairman of the organizing committee. That is the only time a major bridge world championship has been held in Canada. Retek, who represented District 1 on the ACBL Board of Directors for 33 years before retiring in 2012, was elected ACBL president in 2002.”

At a recent Club Charity team event, our team was among the leaders when we sat down for the final round against an expert team. This was the deciding deal.

A. With both vulnerable, your hand, as West, the dealer, is:

At a recent Club Charity team event, our team was among the leaders when we sat down for the final round against an expert team. This was the deciding deal. A. With both vulnerable, your hand, as West, the dealer, is:

You decided to open one spade, lefty passed, and partner raised you to four spades (wide range). After a substantial pause, South, on your right, bid five clubs.

– Question 2 – If you pass, your partner doubles and it is back to you. Your bid?

– Question 3 – If you had consistently passed, it is your lead. What is it?

– Question 4 – If you led the jack of spades, Partner overtook with the ace and shifted to the jack of hearts.

Dummy is revealed as:

Declarer followed with the six of hearts. What is your plan?

B. Your hand as South on the same deal is:

– Question 1 – Do you bid or pass after the four-spade bid by East?

The entire deal (with Don Fescow North and George Retek South) proved to be (see top of next column):

At my table, West won with the ace of hearts at trick two, and continued with the king of spades. Curtains, and we scored plus 750.

At the other table, my teammates Ron Weissberger and Abe Jacob played in four spades; plus 620.

The combined scores were sufficient for us to win the event. I was partnered by the Dean of our club, Don Fescow, who remarked that the five-club bid placed East/ West in an untenable position. They could not make five spades, and even if they defeated five clubs with a heart ruff, they were losing the board.

Why did I bid five clubs instead of four no trump to indicate a two-suited hand? First of all, my clubs were longer and headed by the ace-king. The second benefit became obvious when West did not expect me to hold a five-card side suit, and missed providing the heart ruff necessary to defeat the contract.

Sometimes it is better not to provide full information at the table, as the opponents may be listening as well. This is why Paul Simon’s “The Sound of Silence” is one of my favourite songs, especially when performed by Carmen McRae, who finishes her interpretation with the words “…sound of…”, never thereafter pronouncing “silence”.

There is no need for it.

The 1999 Levendaal Award for Best Play by a Junior