Poor Alfred’s Almanac advises: If you want a thing done well, don’t do it yourself. Get help from an opponent.

If you tackle today’s clubs by yourself, you lose two club tricks. If the opponents start the clubs, you lose only one club. The actual declarer drew trumps and led the jack of clubs. West covered with the king, and South had to lose two clubs and two diamonds.

RED SUITS FIRST South should take the ace of hearts, ruff a heart, draw a trump, ruff another heart and draw another trump. Then he leads a diamond, losing the king to the ace. East returns a diamond to the queen, and South should give up another diamond, not caring who wins the trick. If a red card comes back, dummy ruffs while South discards a club. If East wins the third diamond and leads clubs, dummy captures an honor. If West wins the third diamond and leads a club, dummy plays low, allowing East to win the trick. Then any return by East gives South his contract. 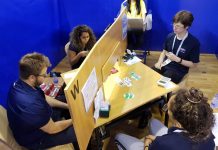 From Orwell to Mollo by Phillip Alder

Transferring the Menace by Norman Squire

20th January 2019
X
We use cookies to ensure that we give you the best experience on our website. If you continue to use this site we will assume that you are happy with it.Ok