Some time ago, there has been a request for a description of transfer advances. In this article I have described my preferred method after a simple overcall.

When they open the bidding, they have not only partially taken our bidding room, also we have an information disadvantage compared to the opponents: They have taken the first opportunity to declare their hands.

In such a situation, it is important to be able to show length in a suit as often as possible. Transfer advances, which have been popularized by Jeff Rubens, help here. Let’s look at a basic situation:

In standard bidding, you have to decide if you want to play 2

as forcing or non-forcing. Both meanings have proponents. Assuming your choice is non-forcing. Then you have to decide what to do with forcing hands with

. Either you can choose to bid 3

), hoping that partner’s further hand description will help you.

My preferred choice is:

Of course your choice may differ from mine, however in some sequences you don’t have to choose! There is hardly any cost (other than memory) to play transfers starting at the opponent’s suit.

If advancer passes, transfers after our overcall function as follows:

The cost of this method is that your cuebid has been exchanged with the bid directly below the single raise of the overcall. This method is most effective if partner has skipped many steps in the auction to make his overcall, as here:

Note that here the cue-bid has moved up two steps, allowing for two transfer bids.

However, in case of an overcall in the cheapest available suit there is unfortunately no room for transfers, as the cue-bid is already the bid directly below the simple raise:

Further bidding after the transfer bid

After advancers makes a transfer bid, overcaller simply bids as if partner had made a non-forcing suit bid:

Particularly, with a decent hand and 3-card support for advancer, jump to 3 of partner’s suit.

As the case of accepting the transfer is the most likely outcome, let’s see what advancer’s 2nd bids show in this case:

is intermediate, if a direct 2

bid is weak, and vice versa.

When responder does not pass

If responder does not pass, one can simply play all new suit bids as non-forcing. Due to the rule-of-40 (which states that even if it looks differently, there are only 40 HCP in the deck), you won’t normally want to bid new suit forcing after an opening bid, an overcall and a voluntary response.

One situation is however notable: The bid of 2NT as response to a two-level overcall when responder has bid is no longer needed as invitational to 3NT, the natural meaning, because of the rule-of-40. This bid can now be used to show a good raise:

Our transfer gets doubled

All is easy if opponents pass or bid after your transfer, but what if it gets doubled? For example:

In this case we have two more bids available. Also we can now treat both red suits as “bid suits”:

Transfers on a higher level

If the auction starts on a higher level, the same principle still applies:

To conclude a final warning: Be sure to agree exactly when transfers apply, otherwise all the gain of playing this convention can be lost in one single hand! 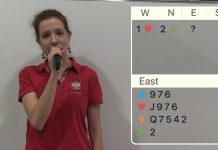 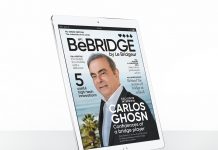 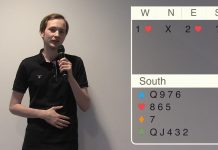 When Manure Gets in the Way by Amit Chakrabarti

27th September 2017
X
We use cookies to ensure that we give you the best experience on our website. If you continue to use this site we will assume that you are happy with it.Ok