For years M. Loreille was one of the most fruitful and reliable automotive historians in France. He was a specialist in the car makers of Lyon (even the most obscure) and a pioneer in oral automotive history. (Source: Unknown celebrity: Cognet de Seynes)

Osenat in Paris auctioned an important part of his impressive collection of documents and automobilia. Among the lots was a radiator from a Cognet de Seynes car (sold for 650 euros and misspelled by Osenat as Cognée de Sene…). Lucien Loreille wrote an extensive article on the history of this interesting make from Lyon in L’Album du fanatique de l’automobile of June 1970:

Edouard de Seynes and Victor Cognet became associates around 1907 and built their first prototype cars in 1912. These had two characteristics: the engine, gearbox and transmission were united in one bloc and the engine would stop running when the lubrication became insufficient. Thanks to its construction the car was almost without vibrations and the size of the engine could be kept small and thus economical.

In this world championships in Lyon the BB French team brings memories back to the Cognet de Seynes…39 was France margin at the first break. These were two boards that helped France to add double swings.

Board 6 (click on the boards diagram for a better view) 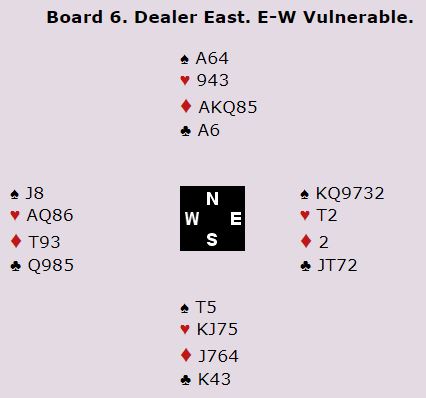 Cornell won the trick, and continued with the

Q. Declarer won with his ace to switch to a small heart. Dummy’s

J was covered by West’s queen. Back came the

10. Lorenzini won with the ace, and played four diamond rounds, pitching a club in the last round of the suit.

He continued playing the

9, West won with his ace, and played a club (late), Lorenzini played his ace, a heart to the king, cashed the club king and lose the last heart for exactly 9 tricks.

With the heart position, declarer had to lose two hearts, two diamond ruffs (West and East) and a sapde. 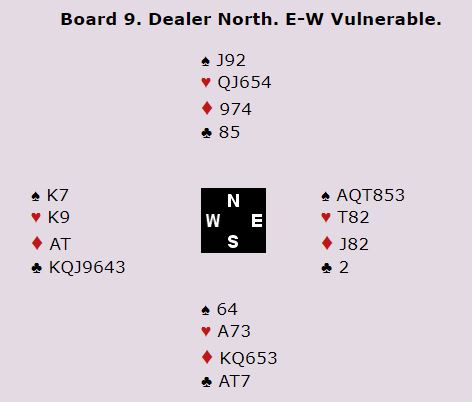 Q, and switched to the

A and left his hand playing a small heart.

Declarer won with his king, pitched dummy’s heart loser in the

Q, and after two trump rounds claimed his contract.

Bach-Cornell for NZ didnt arrived to the game, they played 3

these were some of the comments in the BBO VG at vthe end of the set:

nick jacob→: relentless pressure from France. They have played aggressive and accurate bridge and have thoroughly outplayed New Zealand so far.

lmilne→: I think this tournament has been a big goal for this group of French players for a long time. And now they get a chance to give it a crack at home – big opportunity

But at the middle of the match these were some of the comments:

KiwiBridge→: they are all tough as were the Netherlands

All the boards matchs and results: 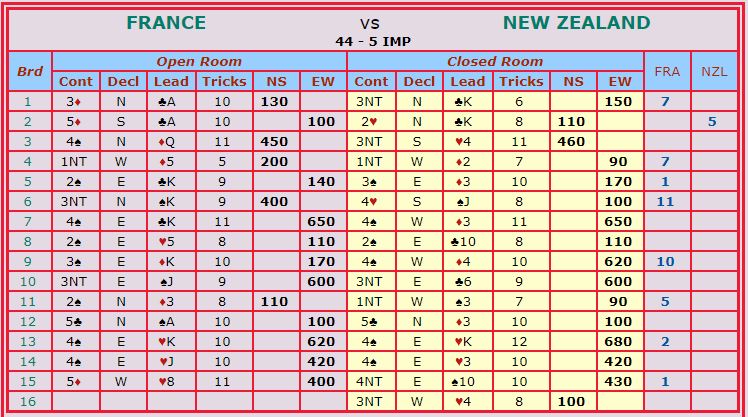 How Can You Count on Success? By Phillip Alder