Partner opens the bidding, your right-hand opponent bids your void at the five level and you have a strong hand with the other two suits. Now what? 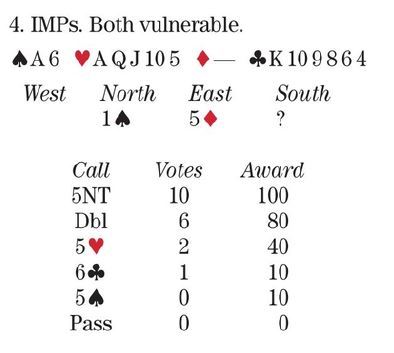 “5NT” says K.Sanborn. I’ll take a chance and force to slam. This is the only way to get us to the right strain.’

“5NT, pick a slam,” says Rigal. “Anyone who tells you that they have any idea what’s right, should be kicked off the panel A few might resign, mind you, rather than answer this one!” “yes, we could be cold for a grand slam,” says Theurer, “but East’s preempt has robbed us of too much bidding space. so I’ll bid 5NT and set tie for getting (hopefully) to the best strain. Partner should not read this as grand slam force. There are more hands where this bid is needed as pick a slam, as is the case here.”

“5NT is pick a slam,” says Meekstroth’. “Who is coining up with these problems?”

“We expect partner to get the 5NT as pick-a-slam bid,” say the Cordons. “It’s much more useful than the old grand slam force. Double could be right, but we are oddson to have at Mast a small slam. Partner would likely pass a double.”

“I hope partner can work out that 5NT is pick a slam,” says Walker. “I can’t jutstify settling for plus 200 or plus 500 when I’m so certain we have a slam somewhere.”

“I don’t think partner will mistake 5NT for grand slam force; says Falk. “Double hardly describes this hand when I want to be in slam somewhere.’

There’s a comedian in every crowd: “5NT” says Robinson. ‘This is choice of suits. Let partner guess”

“Double shows values and no clear-cut action,” say the James. “I suspect we have a better contract than 5

doubled,” says Boehm, ‘but I see no reliable way to guess what it is. Once in a while, partner can take it out, and then we’re in good shape.’

“I really don’t like double,” says Cohen, “but I can’t see guessing to bid 5

. In my dreams, partner pulls the double, but in real life, he will probably pass, and I have done the wrong thing.”

Two experts see the danger of double, but don’t want to commit to slam.

“I must bid, but what?” asks Stack. “I would bid 5NT if I thought partner would choose between hearts and clubs, but it should probably show a stronger spade tolerance. I will opt for the reasonable guess of 5

,” agrees Kennedy “The power of preempts has struck again.”

“This is more fantasy,” says Mike Lawrence. “I will guess to bid 6

Which bid has a higher frequency after a preempt: the grand slam force or pick a slam? The panel feels using the bid as showing two suits occurs more often, and, therefore, is more useful.