Bermuda Bowl: 3:30 in Bs As, I decided to watch Italy – Norway. When the match ended I was left with the impression that I have witnessed too much double digit swings. For Italy the problem was that there were much more in the Norway column. 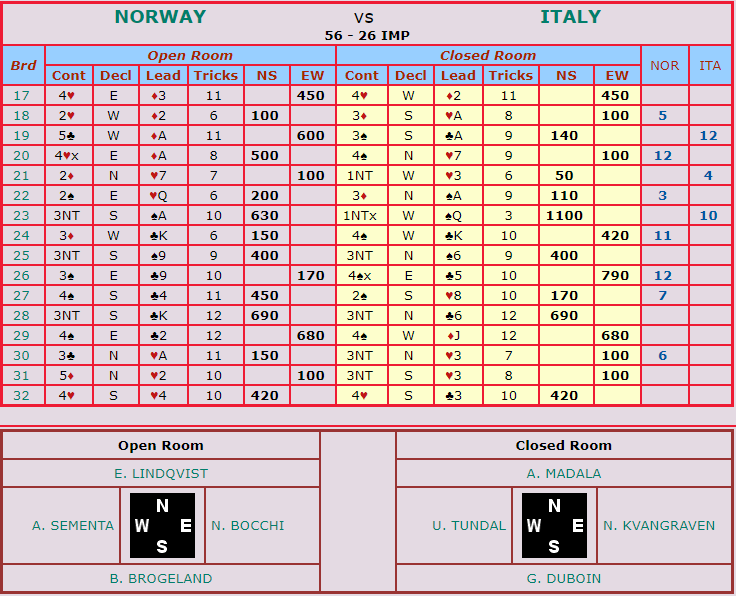 These were some of the boards:

Duboin opened his hand with a 3

At the other table, Brogeland chose to open at the second level, that helped Sementa -Bocchi to arrive to the club game = +600 and 12 IMPs for Italy.

Tundal showed his hand with a 4

opening bid, Madala-Duboin arrived to the 4

contract and went one down. At the other table Sementa opened with a 3NT bid, Bocchi corrected to 4

and Brogeland doubled, end of story.

AQ109xx, and switched to a small spade. Bocchi covered Lindqvist queen with his ace, cashed the

K and played a heart to the ace, afterwards came the king and claimed 8 tricks, two down -500. And 12 IMPs for Norway.

At one table N/S arrived to 3NT after not finding a major fit. They ended making 10 tricks. At the other table Duboin also chose to open his hand saying 1

, Tundal doubled and Madala- Duboin did not forgive. The norewigian pair ended playing 1NT doubled and payed 1400 after N/S made their 10 tricks.  10 IMPs for Italy.

Tundal opened his hand with 1

, and after showing a minimum hand with 6 spades cards, his partner chose to play 4

At the other table Sementa opened with 2

m and ended playing a diamond partscore, 11 IMPs for Norway.

from partner closed the spade game. After receiving a club lead, declarer won whith his ace and ruffed a club in dummy. Declarer ended losing, two trumps and a heart for +620. At the other table after a one spade opening bid, Sementa answered 1NT and didn’t accept his partner’s 3