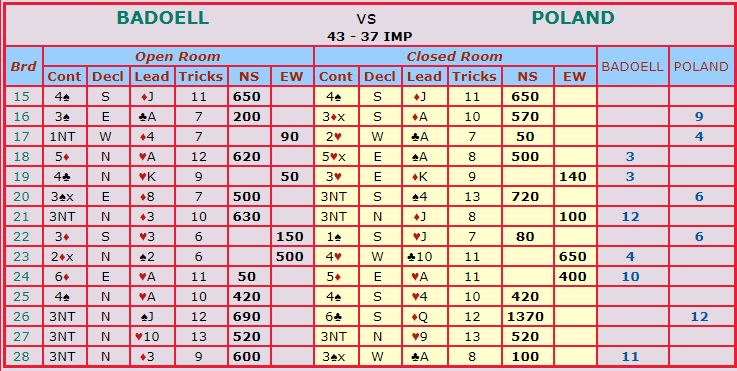 , and his partner answered 2

intended to accept the suit, but after his partner’s 3

clarified the trump suit. Finally they landed in 6

A lead and a heart continuation ruined their hopes. One down.

At the other table E/W carefully stopped at the fifth level and had no problems to make it, and 10 IMPs for Badoell.

6 singleton, Kopka played the king and declarer won with the ace. Van de Paverd continued with the

10 and when East played low he also played low from dummy winning the trick. When he continued with another heart, East played the queen that was covered by dummy’s ace. Now declarer played a club to the

J, and Cichy played his

Q wining the only trick for the defense. Declarer claimed 12 tricks.

At the other table the bidding arrived to a different and higher spot. Bazyluk also opened 1

and his partner started showing his spades, South continued describing his hand with 2

continuation was 4th suit forcing. 2NT showed a weak opening bid, 3 clubs was natural, and the partnership started a cuebid sequence, after which they arrived to the club slam. After the