Bermuda Bowl: 4:50 am in Bs As, looking what match to watch by chance I entered to USA1-England and got surprised by the result, USA1 was in full recovery adding 76 IMPs vs the 13 IMPs added by England. Now the match that had started the day with USA 1 trailing England by 63 IMPs, was: USA 1 158 – England 160.

In an instant I remembered an article that I read in 2018: NICKELL Wins USBC By Bridgewinners, saying:

Team NICKELL held a 107-64 lead over LALL to start the final day of the USBC, and it extended its lead in the fifth segment. LALL stunned NICKELL with a 60-6 sixth segment and won the seventh 57-24 to lead by 31 with one segment to play.

In classic NICKELL fashion, however, NICKELL staged a comeback, winning the final set 66-24.

And they did it again!!! 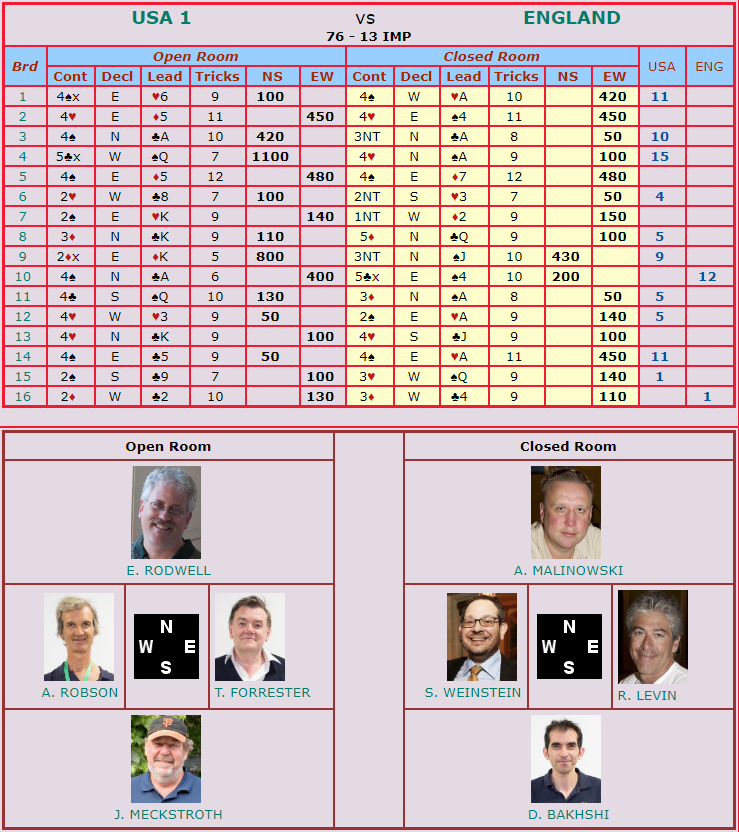 These were some of the boards that made the difference:

Both tables arrived to the 4

contract, in one of them Forrester (East) was the declarer  and Rodwell doubled the contract.

5, Rodwell won the first trick with his ace and returned the

8, Meckstroth covered with his

9, and ruffed a diamond in dummy with the

K and continued with the

5, Forrester chose to play the

10 from his hand and could no longer win the contract. South won the trick with his

J, and played another club to his partner’s

K sealed the contract fate, one down and 11 IMPs for USA1, when Weinstein managed to make 10 tricks, playing the

5) when he played club for the first time.

Meckwell chose to play the spade game. Declarer lose two clubs and the trump king. At the other table Malinowski chose to play 3NT.

K, and after winning the trick and watching his partner’s

5, switched to a diamond. Malinowski won with his queen, and continued with the

J winning the trick. Almost locked in his hand he decided to play the

6, Levin played his small spade, and Weinstein won the trick with his

J to continue with a diamond to dummy’s ace.

The declarer left dummy with a spade, West played low and Malinowski chose to play the queen, now Levin appeared with his king and played another diamond. When he regained the hand with the club king he had a diamond trick for one down. 10 IMPs more for USA1.

Robson opened his hand with 1

, his partner decided not to correct and Rodwell doubled. Declarer only could make 7 tricks for -1100.

At the other table, Weinstein open his hand with 3

A killing lead, after winning the first trick he continued with the

Weinstein ruffed and played a small diamond to his partner’s valet and was able to ruff another spade for one down. And 15 IMPs for USA 1.

At both tables East opened with 4

, and the lead decided the fate of the contract. Bakhshi after listening the 4

opening bid decided to led the

At the other table Meckstroth led the

5. Forrester won with dummy’s ace, and played a small heart to his king, ace. At the end declarer had to lose two more hearts and the trump ace for one down, and 11 IMPs more for USA 1.

As I finished to write this article, USA 1 ended the job winning the last set USA 1 25 to England 2 and getting his ticket for the semi finals…

23rd September 2019
X
We use cookies to ensure that we give you the best experience on our website. If you continue to use this site we will assume that you are happy with it.Ok