It seems that only the first 5 have 100% guaranteed classification, for the QF stage. Tomorrow all the teams will have to redouble their efforts and try to get their Holy Grail.

For Israel is playing a young couple: Dror Padon- Alon Birman. Both play together since they were juniors, winning Albania 2011, Veldhoven 2011. Second in Taicang 2012, third in Wroclaw 2013. 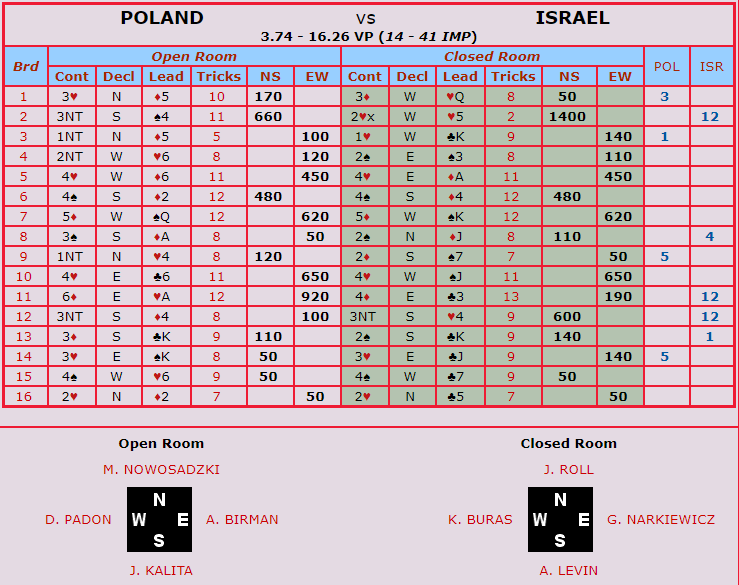 Levin opened with a 1

bid, and Buras competed with spades. Roll passed, East passed and Levin reopened with a double. After two pass, Narkiewickz (POL) asked for another strain with a redouble, Buras (POL) proposed hearts that Roll (ISR) doubled defining the final contract.

With a defense without mistakes, the declarer could only make two tricks and was 6 down = -1400. At the other table although Padon (ISR) after a 1

After a pass by dealer, Padon (ISR) opened with 1

. And Kalita added pressure elevating the bidding to the fifth level. Padon passed, and after a while Birman chose to play the diamond slam.

Only the heart ace lead prevents declarer to make 13 tricks, and that was Kalita’s lead. After a heart continuation declarer claimed 12 tricks.

At the other table a bidding misunderstanding led the Poland pair to play a contract below game, and another 12 IMPs for Israel.

As we can see a diamond lead is required to defeat the contract, it generates three tricks plus two aces. Buras (POL) led a heart, and declarer made: Two spades, three hearts, three clubs, and the diamond ace.

At the other table Padon (ISR) led a diamond. Nowozadski played low diamond twice and had to play the ace in the third diamond round. Declarer played a club to his king, ace. When declarer played spade, Padon was able to play his high diamond for one down and another 12 IMPs for Israel.