I recently played in the 6th World Youth Open Championships, held in Opatija Croatia, on team SIVY B, with Ben Kristensen, Sarah Youngquist, and Cornelius Duffie.

I’m writing this article to thank the people who helped fund us to go (pretty last minute at that), as well as to write about a few of the more interesting hands we encountered during the tournament.

So first, thanks so much to Marty Fleisher, Max Schireson, Cadir Lee, and one more person who wishes to remain unnamed. We were still doing planning and booking literally in the week leading up to the event, and we all just want to express our sentiments that we wouldn’t have been able to go without all of your help.

For brevity, I’ll only be giving hands during the team event (there was also a Pairs and Individual event). Just to give a recap of the results, Ben and I finished 5th in the Pairs (Sarah and Cornelius hadn’t arrived in Croatia yet, and didn’t play – Cornelius was finishing up a work opportunity). In the individual, I also finished 5th (deja vu), Sarah qualified for the second day, and finished 15th, while Cornelius didn’t manage to qualify for day 2 (alongside many strong palyers who also didn’t – the field was quite random).

Now onto the hands.

We started the qualifying Swiss well, and were in a virtual tie with my close friends from Australia in the sixth round of eight 8-board matches.

The first deal presented a really interesting play problem for my partner: 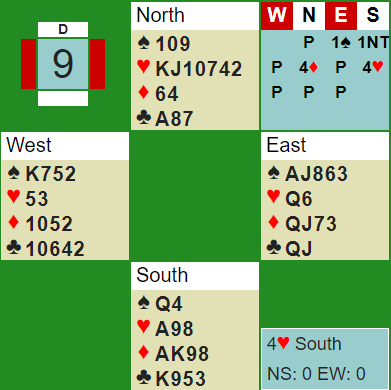 because we play that as weak with both majors (we don’t have a heart preempt at the 2-level). I could choose to open 3

, but chose to pass. According to Ben, West did briefly consider bidding over 1NT.

In the play, the defense led the

Q, won by Ben with the ace. Ben now made the excellent play of exiting with the

On the actual hand, West played the

10, and Ben won the king. Ben now knew East had 4 diamonds, and eventually elected to play East for 6-1-4-2. After the session though, we determined that there is an excellent play available that doesn’t rely on guessing the heart. Do you see it?

There are two similarly themed plays that work. After winning the

K, playing a club to the ace, and a club towards your hand. Once East follows (or pitches), win the king, and play

A, and take a heart finesse into East. The finesse will either win, or East will be endplayed, on all the likely shapes/hands.

The other idea is to first ruff a diamond, then play

A, club to the king, ruff the last diamond, and the do the same tactic of

A, finesse into East.

The match did not go well for our side, and after 7 boards, we were down 29-5. We got some back on the last board though: 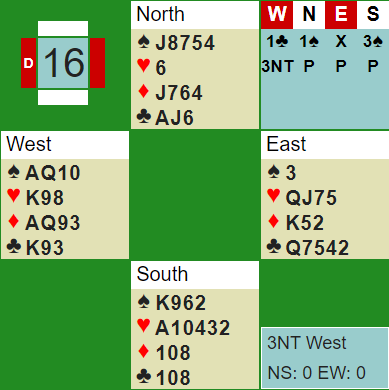 Cornelius declared 3NT as West on this board. He won the

5 lead to the king with the ace. Recognizing that South was the danger hand, Cornelius made a concerted effort to lead through the South hand. Note he likely needs to establish both heart and club tricks. He made the excellent play of cashing the

Q, then crossing to the

K to lead a club off the dummy. If South had the ace, he would be forced to duck, and Cornelius could then switch to hearts with good making chances.

When North showed up with the ace, Cornelius was home when she continued spades (he could knock out the

A for 3 spades, 2 hearts, 3 diamonds, 1 club). North’s spade continuation wasn’t ideal, but on the actual hand she was almost endplayed. The best return was a club, but declarer can still make with some guesswork, and I have full faith in Cornelius that he would have done so.

We won 13 imps on this hand, when declarer went down 2 at the other table (playing hearts first), to lose the match 29-18.

Australia won the qualifying Swiss handily (well done to them for that), while we held onto 3rd place despite losing our last match badly to Italy. In the quarterfinal, we faced Poland in a 32-board match. This was a match where everything kind of went right for our side, and we’d built a 50-imp lead in the first 16 boards.

The second half was wild, not just because of our opponents trying to make up the gap, but also because of some of the hands. Check this one out, for example: 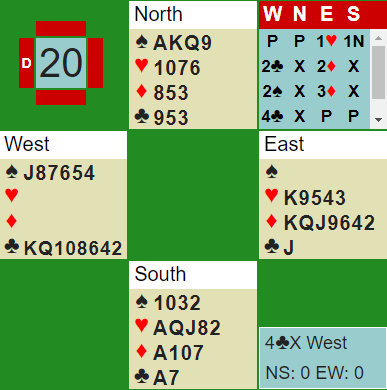 as East, but she showed good discipline at the end of the auction to trust her passed partner and put down the dummy in 4

Q lead, Cornelius was able to get out for down 1, -200, which, as you might imagine was a tame score compared to some of the numbers collected at other tables. Ben and I collected +1400 defending 5

X. There were a number of 1100’s at other tables. In the U21, my American and Canadian friends collected +2000(!), which helped them win their quarterfinal match.

We moved onto the semifinals the next day, to play a 56-board match against Natt (i.e., England). Again, this was a match where everything seemed to go right for our team. Take this, the second board of the match: 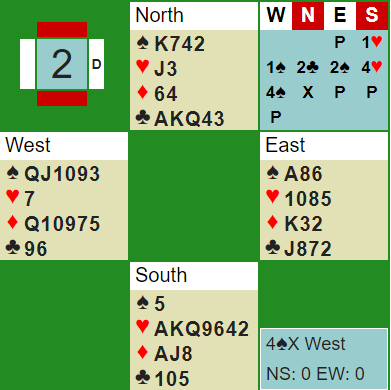 As West, I bid like a maniac on this hand (after already playing 5 days of Junior bridge, perhaps I’d been sucked in), taking the sacrifice in 4

. Thankfully, I bought the perfect dummy. The play was also of interest – note that South thought about removing the double of 4

before passing, so I was confident they had spade shortness.

North cashed the AK of clubs, and the defense played two rounds of hearts. I ruffed with the jack and played the

10 to the king, North following with the

6 (standard carding). South won the ace and played a third heart, which I ruffed with the queen. North thought awhile and pitched a club. From this, I was pretty sure North had 64 of diamonds. The shape seemed clear, and I thought there was no way North was thinking about overruffing here. Thus, he must have been thinking about pitching a diamond, which he wouldn’t consider with Jx of diamonds.

I needed to get to dummy to take a diamond finesse. If I play my small spade to the 8, diamond to the 9,

Q, North would ruff and tap me with a club, promoting his

7 as a 6th trick for the defense. Thus, I went with the odds and played a spade to the 6, diamond to the 9,

Q. North ruffed, but with dummy still having A8 of spades, there was nothing the defense could do to prevent me from taking the rest. Down 2 was worth 8 imps (our teammates made +650).

Later in the match, Cornelius had another chance to shine as declarer: 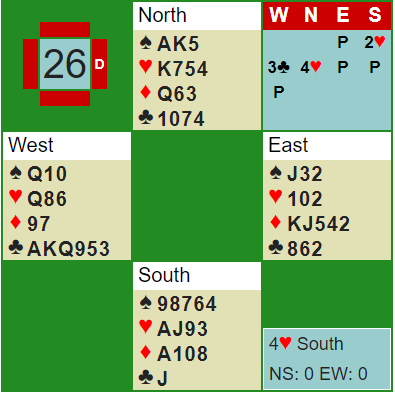 weak for both majors, a convention both of the pairs on our team employed with good success (this tournament anyway). In 4

, Cornelius got a high club lead, East following with the

2 (standard), and West shifted to the

9, a good play. Otherwise Cornelius might have made by setting up spades. The diamond went to the jack and ace, and now declarer needs to pick up trumps to make. He cashed the AK of spades, to try to get a count in spades. East played

3 (standard), while West’s spades also looked likely to be from a doubleton. Guessing that West was 2-3-2-6, and hoping from the overcall that West was more likely to have the

Q, Cornelius played Ace then Jack of hearts, pinning the

10, to wrap up the vulnerable game.

Right play or not, I’m really happy Cornelius was working hard on counting the opponent’s shape as declarer, and of course I was also happy as his teammate to pick up a game swing.

We won the semifinal comfortably, even getting a withdrawal after 3/4 of the match.

We moved onto the final to play the Netherlands. When the final started as smoothly as the previous 2 matches, I could barely believe how well things were going. I hadn’t even been very confident that we would qualify. We were up 37 imps after the first 14 boards of the 56 board final.

Part of the margin was due to this hand, which Sarah declared: 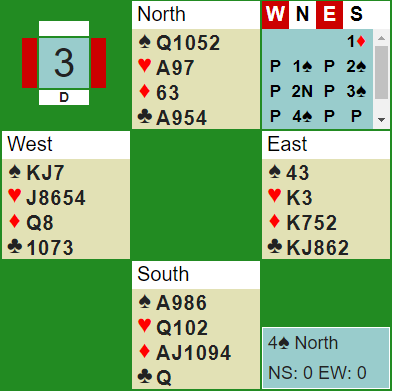 East hit on the unfortunate lead of the

K. Sarah showed technique I was proud of by winning and not ruffing clubs or drawing trump, but immediately going after the side suit, diamonds. She played a diamond to the jack, won the club return, and played a diamond to the ten. Only now did she go after trumps, and she was able to wrap up 10 tricks, for a 6 imp gain (at our table, North passed 2

We finally started to encounter some major setbacks in the 2nd and 3rd sets. In the 2nd set, I held:

(my style isn’t to guess slam in this situation). The other table bid 6

in the same auction. This was a success when partner held the

A and 6 solid spades.

It was pointed out to me later that night that I should have bid 4NT (“minors”), and corrected 5

to make a slam try in diamonds. This would have gotten our side to slam scientifically.

After 3/4 of the match, our lead was down to 6 imps. In the last set, with a combination of playing a bit better than we did in the 2nd and 3rd sets, and a bit of luck (our opponents bid a slam basically on a finesse that was off, which swung 26 imps), we were able to rattle of the first 39 imps of the last set, and despite losing a few imps near the end, we held on to win the match by 28 imps.

I’m thrilled to have been a part of this team, and I just want to thank you guys, my partner and teammates, for being there with me. It was great hanging out and talking bridge with all of you. I also want to thank the people who funded us one more time – Max, Cadir, Marty, and unnamed funder, you helped make this possible.

Lastly, in case you were wondering, our team name, SIVY B, refers to the Bay-Area based youth bridge organization,SiVY, which stands for Silicon Valley Youth. The B does not refer to bridge, but actually refers to Ben, the only member of our team who is not local to California, and thus was not a member of SiVY.