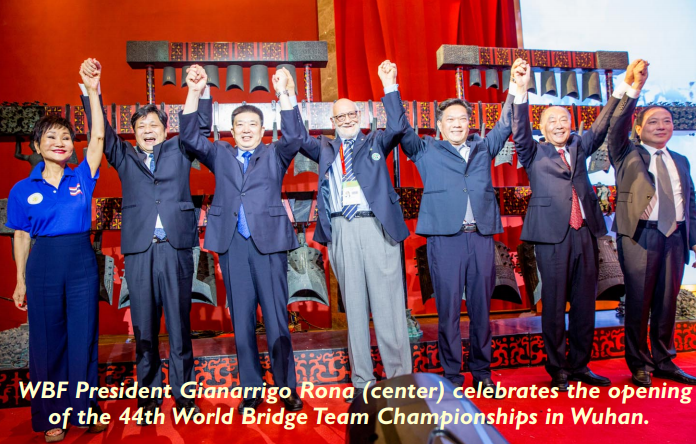 September 14th: Not long after 7 p.m. on Saturday, September 14th, World Bridge Federation President Gianarrigo Rona declared the 44th World Bridge Team Championships open. The applause in the packed banquet hall at the Wuhan Asia Hotel was thunderous as the anticipation of another large-scale international tournament in China reached fever pitch. Among the celebrants were members of the 96 teams gathered to compete in the top events in world bridge, from the Bermuda Bowl to the World Transnational Open Teams. (Source: Bulletin 1).

These are some of the Boards played the day 1:

Italy-USA2: Board 3 produced the first double digit swing when USA2 managed to bid a slam where Italy stopped at the game level.

But what happened with this board through the different championships?

In the Bermuda Bowl, only India, Sweden and USA 2, in the Venice Cup only Denmark, in the d’Orsi Trophy only USA 2 and Bulgaria, and in the Mixed Teams only Canada, found their way to the slam.

Many couples hit the brakes at 6

on board 20, while for example De Wijs – Muller landed in the Grand.

Some bidding interferences generated clues and helped some couples to stop before the game.

rhelle: This is a fine example of the ‘kill point’ as described by the late Jens Auken.

De Wijs in North received the

J won the first trick to continue with a small diamond (

3, after watching East play the

4, and Levin after founding himself in the lead with the

After winning the trick with the

Q, Weinstein entered in the tank. At this point a club return (the ‘kill point’) would have been the only one that could have a chance to defeat the contract but a heart return helped declarer to make the game. This was what a BBO commentator wrote:

And if a world class player like Steve Weinstein doesn’t find it, it means it is just about impossible.

At the other table a heart lead would have been the ‘kill point’ but the leader chose a club.

27th August 2019
X
We use cookies to ensure that we give you the best experience on our website. If you continue to use this site we will assume that you are happy with it.Ok