First swing was a 7 IMPs swing. 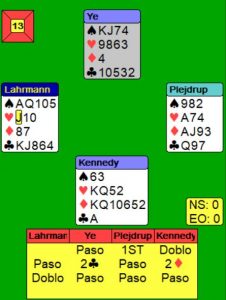 After a pass Andreas Plejdrup (DNM) opened 1NT and Stephen Kennedy (ENG) doubled, after his partner’s 2

, Kennedy mentioned his diamonds, and Christian Lahrmann’s double closed the bidding. Declarer lose the heart ace, the diamond ace, two trumps and the ace of spade to score +180.

At the other table was played the same contract for one down, and 7 IMPs for England.

Board 14, produced 10 IMPs for Denmark when England choose to play a diamond game, one down and England stayed in 3NT done. 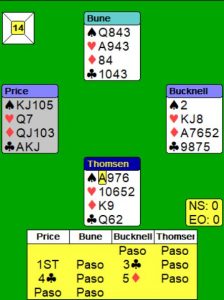 After a 1NT opening bid when Price (ENG) found out the diamond suit in his partner’s hand chose to play the game there. The

A lead sealed the future of the contract. The two first tricks were the spade and heart aces and South wait peacefully with the

K in his hand to defeat declarer.

At the other table an unbeatable 3NT was played and made and 10 IMPs for Denmark.

Board 15 returned 6 IMPs to England when they played 2NT done, where Denmark chose to play a NT game one down, and board 16 gave them another 5 IMPs when they made 3

where Denmark in the same contract was two down. 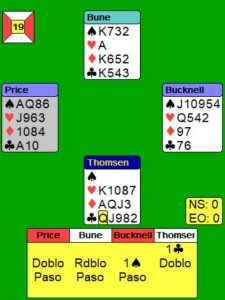 , Thomsen doubled and that was passed by his partner and all the other players at the table, two down was +500. At the other table Denmark played a 3NT contract made… producing  a new difference for England.

30th April 2020
X
We use cookies to ensure that we give you the best experience on our website. If you continue to use this site we will assume that you are happy with it.Ok