On Monday, 16 September, the most watched match in BBO (Round 5) was Sweden-Italy, so I decided to stay there and see what happened. Sweden was in the lead all the match but in the last boards Italy could narrow the difference to lose by only a few IMPs. 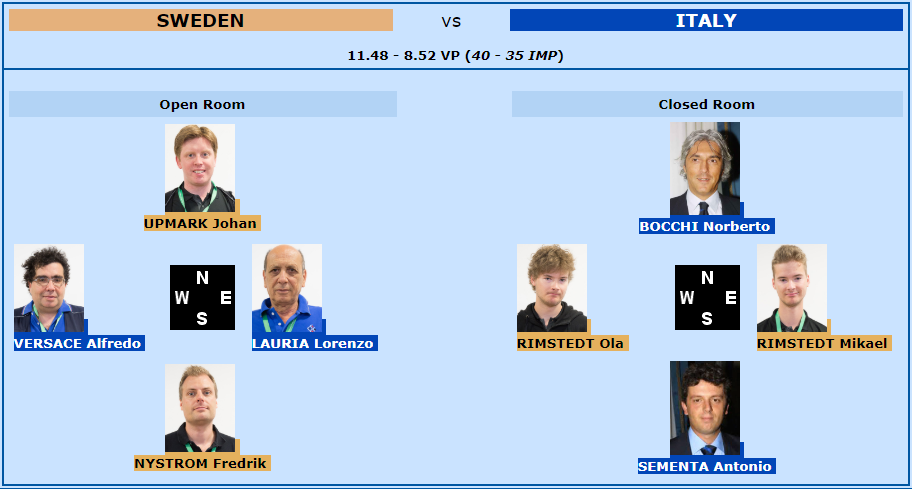 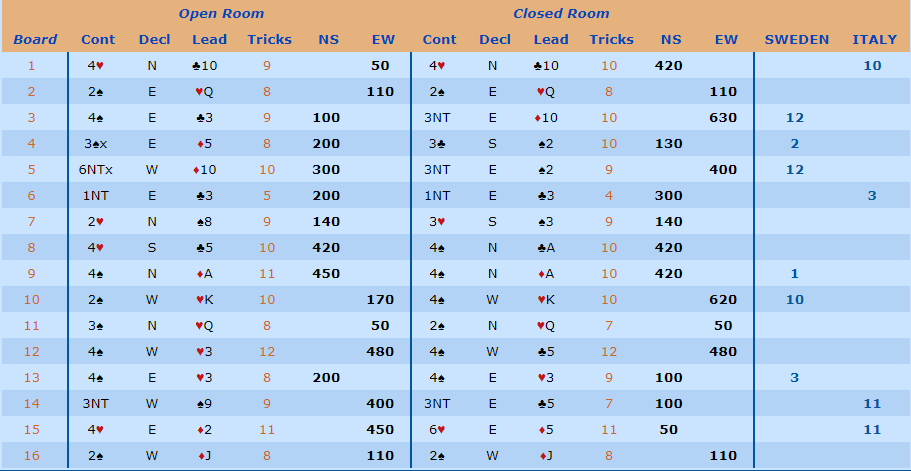 These were some boards that made the difference.

Both tables arrived to the same contract, four hearts. Both declarers received the same lead:

10 and both declarers played the

A watching West playing his

Bocchi continued with a heart to his king, and a small heart, and when East played a club he let Rimsted

Q win the trick. The diamond return was won with declarer king, two trump rounds and a diamond from dummy, helped declarer to claim his contract.

At the other table, East won a trick while his partner still had a trump and a club ruff defeated the contract.

The Rimsted brothers chose to play 3NT, declarer received the

10 lead and was able to make 10 easy tricks losing only two hearts and a club.

At the other table Versace -Lauria played 4

, and received a club killing lead. Upmark won the lead with his ace and returned a heart to his partner’s

Q. Nystrom cashed the heart ace, and played a third heart, his partner ruffed and one down.

Rimsted x 2 arrived and made the spade game, while Versace -Lauria only played a spade partscore.

K, continued with his second heart, Sementa won with his ace and played a third heart. Declarer chose to get rid of a club loser and North ruffed. The diamond return was won with the queen, to continue to a club to dummy’s ace. When declarer played the trump queen, the italians gave up.

At the other table Italy also made 10 tricks, but had to pay the partscore, losing 10 IMPs.

Both tables arrived to the same 3NT contract. Sementa led a club and sealed the fate of the contract, one down, as declarer had to lose two clubs, two spades and two diamonds. At the other table Upmark chose a spade lead, and declarer was able to develop his 9 tricks with no club danger.

The Rimsted brothers couldn’t stop before slam. The diamond lead developed a trick for the defense, and declarer ended one down.

At the other table the italian played a heart game and received 11 IMPs, for their decision.

These were the bidding explanations in BBO: