In the WBF Youth site there is a series of articles about the Principle of Restricted Choice (“PRC”) (Click Here to acces them). In one of them Andrew Robson starts his explanation with this words:

If one opponent plays a critical card in a suit, his partner is twice as likely to have the adjacent card in the same suit. This is because of the Principle of Restricted Choice (“PRC”) – a mathematical theory that was found to have relevance at the bridge table by Terence Reese. He first expounded the theory in his epic book “The Expert Game”, written in 1958 – an inspirational read for any ambitious player…continue reading.

Yesterday in the last Round I was watching USA1-Australia. With a sum of little swings USA1 was leading by 14 IMPs, when board 11 hit on the table.

At the other table, Edgtton opened 1NT and Weinstein interfered with 2

showing Majors). Hung started with a double. East jumped to 3

But Hung wasn’t satisfied, and decided to give it a 4

“try bid” to invite to slam, and the couple didn’t stop before 6

After winning the first trick, Weinstein continued with the

4, declarer played small from dummy, Levin played the queen, and Edgtton won with his king to continue with a small club, and after the drop of the valet by Weinstein played the ace from dummy.

Declarer returned playing a club to the nine for one down. Ouch…

What do we have to play?

This is what happened with the board in the other Bermuda Bowl matches: 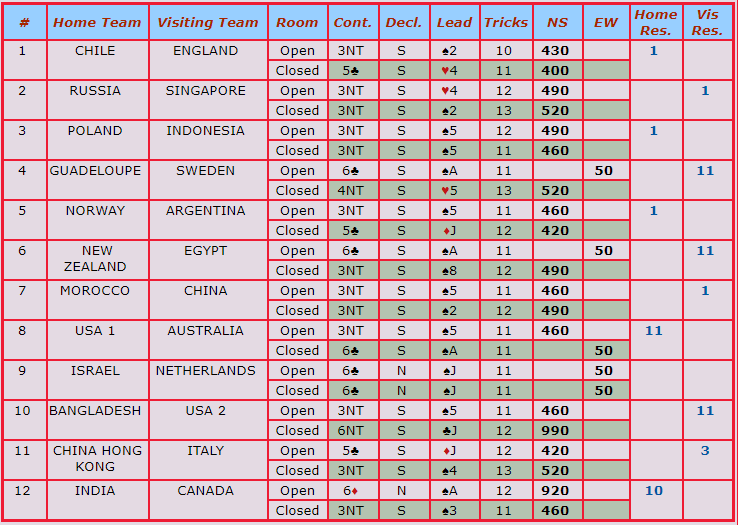