With only three days of round robin play remaining in the four main events, teams not currently in the top eight of their respective contests might well be feeling nonqualification anxiety at this point. Even the leaders might be thinking along the lines of a quote from the legendary American baseball player Satchel Paige, who said famously, “Don’t look back – something might be gaining on you.” Of the round robin leaders going into play today, USA 1 in the Bermuda Bowl and China in the Venice Cup have comfortable leads. China is ahead of second-place Poland in the women’s championship by over 18 victory points — better than most but not an impregnable lead. In the Bermuda Bowl, USA 1 — the Nick Nickell powerhouse — is ahead of second-place Netherlands by 12.77 VPs. India, the team currently at the top in the round robin standings in the d’Orsi Seniors Trophy, has a lead of 5.23 VPs over England, sitting close to the top in second place. Finally, in the Mixed Teams, England, with 220.52, is ahead of France at the top of the rankings by 24.1 VPs. Play continues through Sunday, after which qualifiers — the top eight in each bracket — begin knockout play. 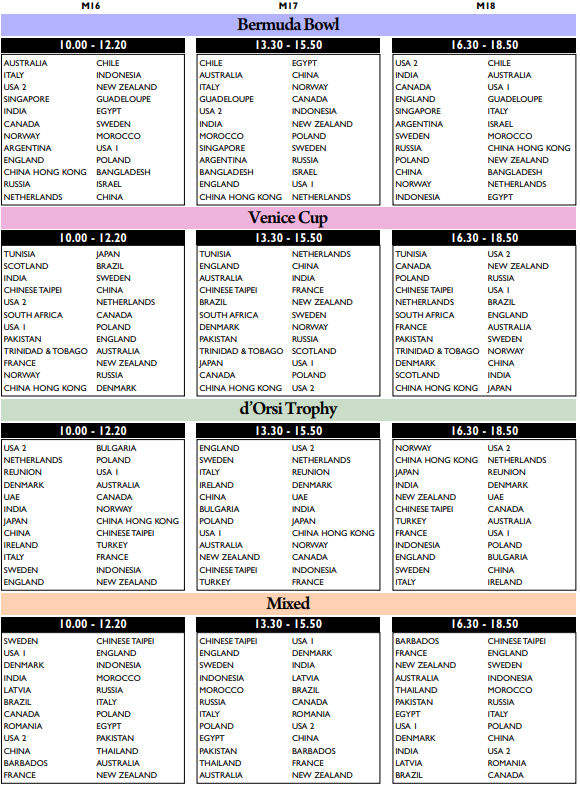 Follow the Norwegian ladies in the World Cup! Both the match against Scotland at 07:30 and against Poland at 10:30 is shown directly on BBO. Go Norway! 🇳🇴🇳🇴