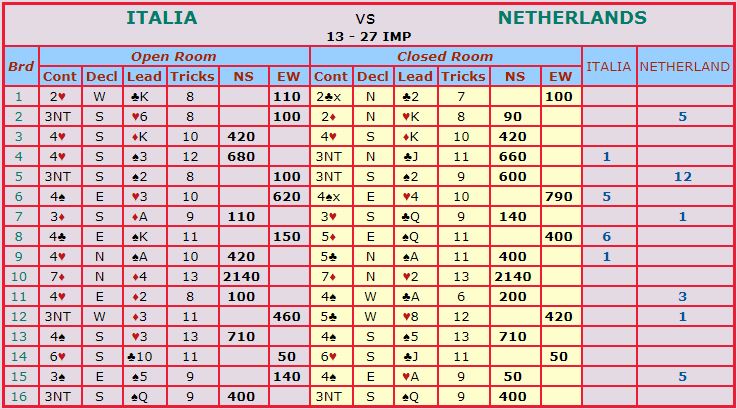 showed a good support to his partner’s suit, Scata jumped to 4

, East compited in spades and that ended the bidding. After a heart lead, declarer was able to ruff his hearts losers to make his contract.

At the other table, East also opened 1

, Coppens passed, West supported his partner’s suit with a standard 2

, and North mentioned his hearts at the three level, East compited in spades, South declared the heart game and after two pass, Chiarandini said 4

doubled by South. The bidding ended. The lead was also a small heart and the play was the same as at the other table, 4

, East showed the minors with a double, and South declared the spade game. After West double, East chose to play 5

, what finished the auction.

Declarer only lose the

A making his contract. At the other table E/W played a club partscore, giving Italia 6 IMPs.

, and after East’s double their partners answered 3

. At one of the tables Donati doubled and his partner closed the heart game, Donati corrected to clubs ending the bidding. At the other table Sprinkhuiz jumped to 5

and his partner chose to play the club slam.

Both declarers made 12 easy tricks, but the Netherland’s declarer received 12 IMPs for reward.

Both tables arrived to the 3NT contract. In one table Sau led a club, North won with his ace and returned a club, declarer had to play his only club stopper and so he was unable to make his contract, when he lost the spade ace. At the other table the lead was a heart and declarer had enough time to develop his 9 tricks and 12 IMPs for Italia.

This set ended Netherlands 46 IMPs Italia 36 IMPs, and a ticket for the semifinals for Netherlands.

18th September 2019
X
We use cookies to ensure that we give you the best experience on our website. If you continue to use this site we will assume that you are happy with it.Ok