Open Silver for the Netherlands

Wuhan, Hubei (China), September 28, 2019. The Netherlands has already lost its games today at the world championships for country teams in China. The open team (Bob Drijver & Bart Nab, Bauke Muller & Simon de Wijs and Ricco van Prooijen & Louk Verhees), which was still 1 imp against Poland yesterday, had a dramatic fourth session of 8–58 imps, but then something came but eventually lost with 153–174 imps. Norway seized the bronze by beating USA 1 with 149–140 imps.

The women’s team (Merel Bruijnsteen & Laura Dekkers, Jet Pasman & Anneke Simons and Martine Verbeek & Wietske van Zwol) lost the battle for the bronze medal of England with 157–162 imps. The gold went here to Sweden, which won the final of China with 189–169 imps.

A remarkable game was game 8 from the fifth session. What happened in all three games with the Netherlands. The Open Team, which a few games earlier had brought a lurid manche in a 4-3 fit, did this trick again. However, the final contract was now very good; watch: 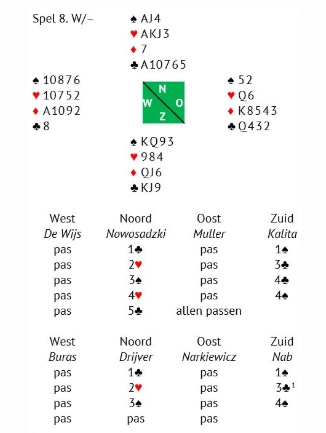 After the heart start, Bart Nab could afford to draw four times and give up a club. After that only

AK were lost. The Netherlands +420 and 11 imps nibbled from the backlog.

For women it was different: 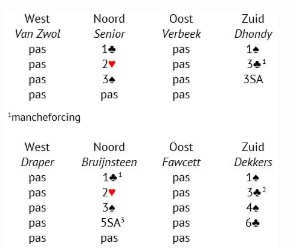 The English were not close to the best final contract, but when Wietske van Zwol did not led a diamond, it had happened quickly. Hearts for dummy’s valet and a club to the jack. That eventually became eleven tricks. England +460.

Partly due to the 6

in the other room, was not a party. Two down meant 11 IMPs away.

Finally, among the seniors, the Indians also found their way to 4 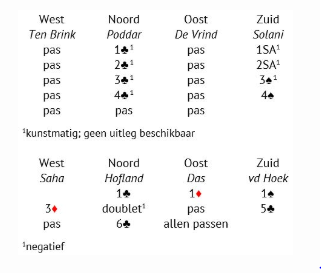 Unfortunately, no explanation is available about the Indian bidding – probably a relay series. It did lead to a good contract. When Frans ten Brink led his singleton club as West, it was quickly viewed: India +420.

Bas van der Hoek and Leo Hofland treated us to a bidding process that would make their age estimate some fifty years younger. The result was corresponding. This meant 11 imps away and the bronze slab pretty out of sight.

In the final session of the Bermuda Bowl Final, the Netherlands fought back on the first ten boards with 15 unanswered imps to a backlog of 127–159. Board 27 turned out to be crucial. Muller-De Wijs offered a sharp 6

in which a lot had to be done. However, when De Wijs approached the trump suit incorrectly, he went down against 4

+ 2 on the Polish side. The door to gold finally shut. The last boards were still in Dutch favor. With slam made on board 27, the Netherlands had won by 1 imp difference.

Read all about it in IMP8 2019, which will be released in December.