The semi-finals were of four 14-board sessions – a serious number of boards, worthy of a world championship. In this report, I will describe some of the biggest swings in the first session of the match between Australia and the Netherlands.

contract in any of my match reports still stands. When I check this article for typos/errors at the end, my first task will be to ensure that I have not put any hard-earned cash at risk. 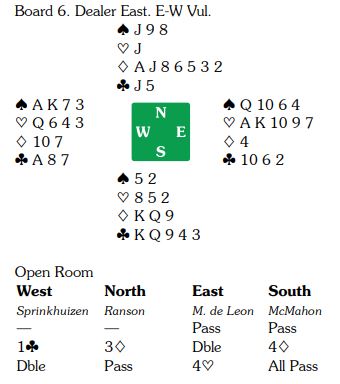 Declarer ruffed the second round of diamonds, drew trumps and claimed +620. Meanwhile, North-South had missed a possible sacrifice in diamonds, costing only 300.

I was expecting West to bid 4

, to ask partner to choose the major. Some text-books say that when you have equal length in two suits, you should choose the weaker of the suits as trumps. On that basis, 4

would have been my third choice on those West cards. What do I know? The immediate 4

J lead in dummy, drew trumps and claimed eleven tricks for +990. If North has passed 4

, there would have been at least a small chance of South finding the 5

sacrifice. It was a 9-IMP swing to Australia, conjured out of the blue by their opponents. 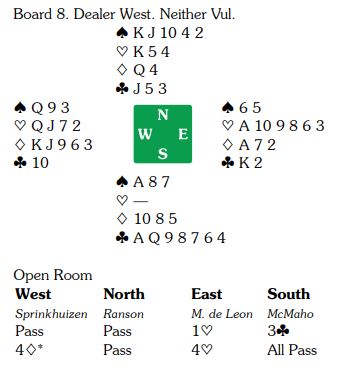 Wow! North-South might make eleven tricks in clubs (or spades), but they sold out to 4

, presumably a weak-jump overcall, did not describe his hand accurately. How was North meant to know that 5

would be a profitable spot? Worse than that for North-South was the fact that 4

might well be made. There were three top losers in the black suits, so declarer would have to pick up the trumps and avoid a diamond loser. When South led the

5, declarer thought for quite a while about which card to play from dummy. He chose the

9, forcing North’s queen, and won with the ace. He then needed to reach dummy for a trump finesse. The

10 and king achieved that objective, and the

Q was led, North playing low. ‘Surely he’s not thinking of rising with the ace,’ we said, as a longish pause ensued. No, he eventually ran the

It was a good moment to be playing a mini notrump. East bid a ‘defensive multi’ 2

and Coppens, for the Netherlands, was happy to bid 5

subsequently. He ruffed the

Q lead and played a low diamond, West rising with the king. A second diamond to East’s ace, was followed by a switch to the

J. After drawing the last trump and ruffing a diamond in dummy, declarer needed to find the

Q for a double game swing. East had presumably started with six hearts, for his multi bid, and had shown two clubs and three diamonds. West was therefore likely to hold three of the missing five spades. His 2

response to the multi might have been more tempting with the

Q in his hand (9 points rather than 7), so we rather expected declarer to guess right.. Declarer played East for the

Q and went one down, but it was still 10 IMPs to the Netherlands. 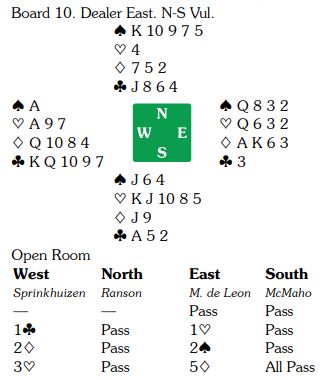 When the opponents shy away from 3NT, ending in five of a minor, the text books recommend leading the unbid suit. ‘With a stopper in the fourth suit, they would have bid 3NT.’ There was no future in a spade lead against 5

here, because West had advertised something like 1=3=4=5 shape. North chose to lead the

4. Yes, indeed! A sidesuit singleton is one of the very best leads possible. The contract could no longer be made. Declarer played low from dummy, winning South’s 10 with the ace. After three rounds of trumps, he called for the

3 from dummy. In a club game, many South’s would shoot in with the

A, allowing the game to be made. No, this was a world championship and McMahon played the

10, losing to the jack. A spade to the jack and ace was followed by the

K, for a heart discard, South winning with the

A. McMahon could have cashed the

K for one down, but his count of the hand allowed him to try for more. He returned a spade, ruffed by declarer. Declarer’s clubs then proved robust enough to escape for one down.

Played by East, the diamond game could not be beaten. The BBO play record is dubious (starting with a first trick consisting of:

2!). When the record regained its sanity at a later stage, declarer played a club to the king and established the club suit with two ruffs. That was +600 and 12 IMPs to the Netherlands. 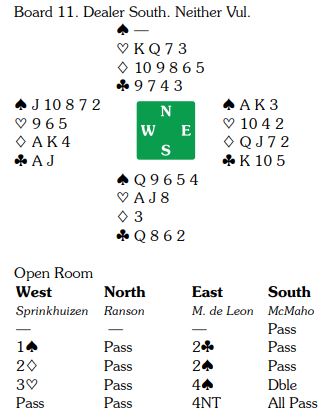 If your crystal ball had informed you of an adverse 5-0 spade break, you would want to play this deal in 3NT. The meaning of West’s 3] was unclear. Might East have bid 3NT over it? Netherlands kibitzers were no doubt hoping for such a miracle, but of course their compatriots bid to the normal 4

Should South double this contract? Perhaps you would want to if your crystal ball told you that at the other table 4

had gone three down undoubled. McMahon decided to double and Mendes de Leon (East) then cleverly removed to 4NT. This was not doubled, so would obviously be an improvement. How big an improvement, though? Let’s see. South led the

J. Declarer crossed to the

Q and tried his luck with the

3. South thought for some time, although he knew that declarer had started with [AK5 from the 2

bid. Eventually South rose with the

Q and North discarded the

3 (low = upside-down attitude). ‘Oh dear, he’s throw an extra undertrick away,’ was the kibitzers’ cry. When South switched to the

8, North won with the

K and… oh no! … returned a club. Declarer had blocked both the diamonds and the spades by this stage, but he still had enough tricks to claim +430. What an amazing deal.

Well, they were in 3NT at one stage. Coppens declined to double 4

and the contract went three down for -150. It was 11 IMPs to the Netherlands. The first session of this semi-final drew to a close with Netherlands in the lead by 34 IMPs to 23. It was still anyone’s game.