U26 SF Australia vs Netherlands 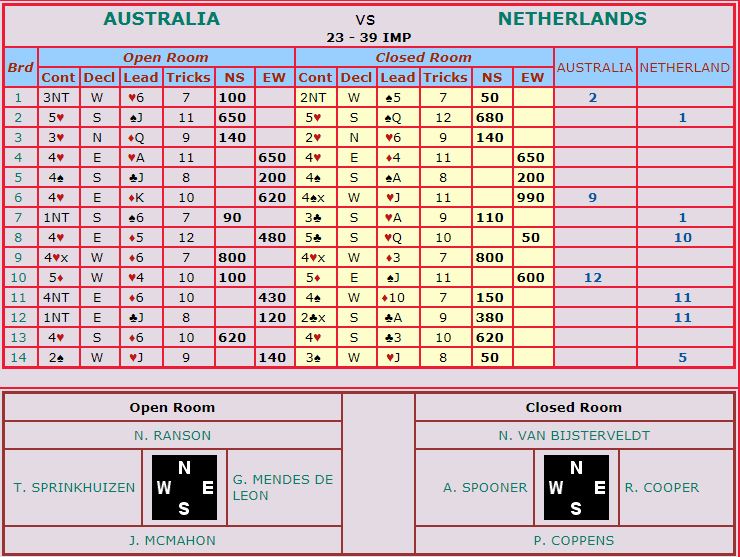 After two pass Sprinkhuizen opened his hand with a 1

and Mendes doubled showing the majors, Mcmahon added pressure with 4

and after West’s double, Mendes chose to play 4

After a diamond lead he didn’t have any problem to make 10 tricks.

At the other table South chose to open with a light/mini 1NT, his partner showed his weak diamonds with a 3

call, Cooper doubled and Spooner chose the spade game. North doubled. The declarer had 11 tricks, but because of the double he scored +990 because of the overtrick and added 9 IMPs to his scorecard.

, and South showed his weak seven clubs with a 3

and his partner closed the heart game.

A. He returned to dummy with a small diamond to the king, and continued with the

Q. North played low, but when he watched Mcmahon pitching the

7 he claimed 12 tricks, (he discards both spades and ruff a club at the end).

At the other table Australia decided to play 5

, one down and 10 IMPs for Netherlands.

continuation was a relay, and the 3

Declarer played a small heart from dummy, Mcmahon played the

10, and the declarer  won the first trick with his ace. He continued with three trumps round ending in dummy, and played a small club to the

J from North won the trick. The spade return was won with the ace, to play the

A and exit his hand with a spade, declarer ruffed with his last trump, run the clubs but have to lose the a heart trick. One down.

J lead. Declarer played dummy’s ace, and North played his king (surprising no?)…Declarer continued with a small diamond to the ace, he exit his hand playing a club to the king, and cashed the heart king.

Declarer continued ruffing a club in his hand, and throwed a heart in the

Q, he ruffed a spade in dummy, and ruffed a club in dummy watching the fall of the ace. And claimed 11 tricks.

U21 SF 1/4: Badoell vs Meisters Disciple 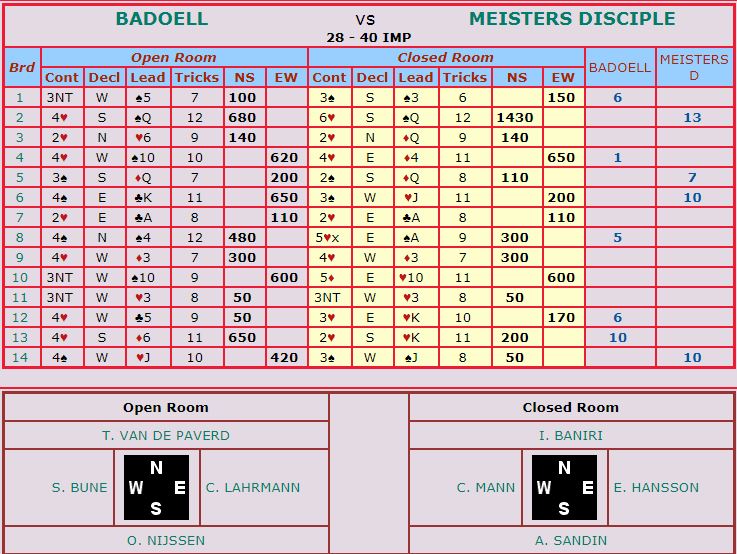 Nijssen opened one heart, Bune competed with one spade, and North showed his club suit, East supported his partner, Nijssen cuebid, and his partner showed his spade control with 3NT, after that South chose to play the heart game. Declarer made 12 tricks.

At the other table Sandin opened 1

and North showed his clubs at the third level. East supported spades, and South doubled. Baniri showed his Hx support with 4

, his partner ask for keycards, and after the answer closed the heart slam.

Q won the first trick, and West continued with his

J, ruffed by declarer to continue with three rounds of trump. He continued with a club to the ace, and played a spade, when he saw the ace of spades over the table, he ruffed and claimed his contract, and 13 IMPs for Meisters.

29th November 2017
X
We use cookies to ensure that we give you the best experience on our website. If you continue to use this site we will assume that you are happy with it.Ok