The University of California at Berkeley won the 2018 Collegiate Bridge Bowl by defeating the Georgia Tech Gold team 78-37 in the final of the contest, held during the Summer NABC in Atlanta.

In the semifinal round, Berkeley edged out Columbia University by 6 IMPs to make it to the big game where, after gaining a 40-IMP advantage in the first half; they cruised to the win.

In the other semifinal bracket, Georgia Tech – last year’s Bridge Bowl champ – beat Harvey Mudd College on their way to the final. In the playoff for third-fourth, Harvey Mudd prevailed by 10 IMPs against Columbia, 57-47. Scholarships for $15,000, $10,000, $5000 and 32500 were awarded to the top four teams. Ten squads entered this year’s collegiate contest which, for the first time, was open to any university/college team; there was no online qualifying round. 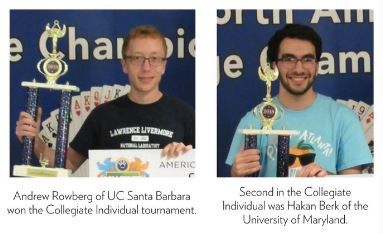 The inaugural running of the Collegiate Individual tournament was won by Andrew Rowberg from the University of California at Santa Barbara. Contestants played with a different partner each round. Rowberg, who is in his third year of a doctoral program in material science at Santa Barbara, dropped into the Individual when his squad was eliminated from the team competition. His win netted him $2000 in scholarship money. Runner-up Hakan Berk of Potomac MD picked up $1000, while Ben Kristensen, from Duluth MN, earned $500 scholarship funding for his third-place finish. Funding for the scholarships and travel subsidies for 10 teams was provided by the ACBL Education-al Foundation and the ACBL.

5th February 2020
X
We use cookies to ensure that we give you the best experience on our website. If you continue to use this site we will assume that you are happy with it.Ok