Achilles, the son of Peleus and Thetis, was educated as a young man by Chiron, the centaur (half man and half horse). One of the conditions of Achilles’s parents’ marriage (the union of a mortal with a divine sea nymph) was that the son born to them would die in war and bring great sadness to his mother.

To protect him from death in battle his mother bathed the infant in the waters of the river Styx, which conferred invulnerability to any weapon. Achilles’s career as the greatest warrior came to an end when Paris, with the help of Apollo, killed him with an arrow which pierced him in the heel, the one vulnerable spot, which the waters of the River Styx had not touched because his mother had held him by the foot when she had dipped the infant Achilles in the river.

On this deal from the second session of the Men’s Generali Masters, only one defender found declarer’s weakest point.

Board 1. Dealer North. Love All 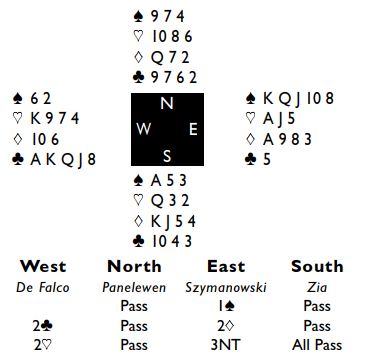 This was a very typical auction, and when Zia led the three of hearts, declarer won with the jack and played on spades, claiming twelve tricks once the ace had been dislodged.
The same result was recorded at every table except number six, where West was the declarer. North, clearly a student of classical mythology, unerringly selected the two of diamonds as his opening lead.

This was the auction:

It took Apolinary around one second to earn his side a complete top! Bravo!

An Enquiry’s Story by Fernando Lema