Source: A babe in the woods of bridge

OK the first cause of lackluster performance is an easy one. Lack of preparation, lack of hardwork. The second one is the lack of concentration, or the lack of focus – or an misdirect focus…

But in bridge, like any performance sport, when you compete in high level competition, state anxiety is our own first enemy. For a competitor who is unprepared, the anxiety may simply because the stakes are higher, be the competition is tougher etc

For example, it is seen frequently in athletes who participate in team sports. It is common to hear athletes talk about the fear of mistakes and the fear of not disappointing a coach or a teammate. In the same way as no one wants to miss the last shot to lose a game by one point or miss a winning field goal attempt on the last play of the game, noone wants to give a game swing away.

So one of the most obvious source of anxiety for us would be in bridge the fear of coming to team mates with a big minus. Try going back to score up with a minus 800 against nothing. You know noone will ask (Well in a reasonable team anyway

) but you also know that they wondering.

Anoter fact in long matches is the “leading by a number” syndrome. And one or more player on the team develop the fear of losing that lead, because it has been known to happen in a big way. So marginal games are bid – because what if the other pair bids it! – , the fear of the -800++ is at an all time high.

And there is the knockout format. The one mistake and you are out anxiety.

In fact, I would say this is a big factor in long matches, where one of the team is leading by a reasonable number. The leading team will avoid “big number” and will bid marginal games because what if the other pairs bids it.

In a previous post, my question was why did the north player not convert 4

His answer was that 4

could have gone for a big number. And in that, full credit must be given to the opponent who read the situation acurately and created the situation. Try not to feel worried about after this auction.
Since anxiety is  difference between a successful player and the guy next door….  the way a player deals with anxiety is an essential step toward best performance.

So how to go about doing that? The firts step is understanding.

In the mean time, if you become aware that anxiety is at work in your game, you could try this kit: 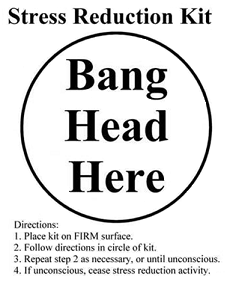