A month ago, I received a Letter to the Editor from Brian Zhang, an 8-year-old who lives in Dublin CA. He was excited about an unusual hand he had recently played, so he attached a write-up of the deal and sent me an email.

I don’t normally receive emails from children that young – most of the correspondence that the Bridge Bulletin receives comes from much older players – so I was eager to see what he had written. I was not prepared, however, for the level of sophistication exhibited by his writing.

I was interested in publishing the letter, but I wanted to make sure he had not gotten too much “help” at home in constructing the piece, so I contacted his parents, Qiang Zhang and Serena Guo – both players themselves – to ask about Brian’s email.

They assured me that Brian had written it completely by himself, and as evidence, they provided even more deals that he had written about following a game at his local club. Take a look at his email, keeping in mind that Brian has been playing bridge for about seven months and has about 50 masterpoints:

One day this summer, when my mom and I were playing IMP practice boards on BBO, I held:

When my mom opened 1

, planning to force game next round if possible. Then my mom bid 7

! I was surprised by this bid, and thought, “Hope you make it,” as I passed.

I was flabbergasted that no one doubled!

West, a robot, led the

7. Declarer went up with the ace in dummy and drew trumps with a diamond to her ace and to dummy’s queen. At that point, I got the feeling that 7

would make even if partner had only the

K x and six diamonds to the A-K. In the end, my mom pitched two hearts and one club from her hand to make 7

. This was the full deal: 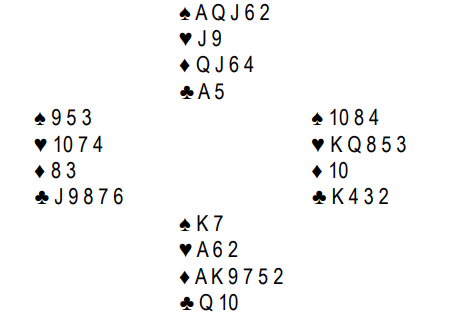 and 7NT, though no one bid up to those grand slams either.

Interestingly, even if my mom swapped the

still makes on a non-heart lead. My mom said that she was thinking about rebidding 2

, but her mouse slipped, and she accidentally bid 7

. She also told me that she nearly fainted when she saw her bid.

At the end, we felt ecstatic about our score on this deal. Brian humorously titled the piece: “Grand Slam: Does It Have to Be So Hard to Bid One?!” To say that I was impressed is an understatement.

Employing words such as “flabbergasted” and “ecstatic” may be precocious for someone his age, but writing clearly about a simple deal is a task that eludes even some adults (trust me; you should see some of the stuff I get in my inbox), so I wanted to find out more about Brian After a few more email exchanges with his parents, I discovered that the family would be playing here in Las Vegas, so I asked them if we could arrange for Brian to play a session with me.

They agreed, and I met Brian and his parents on Sunday to play in the afternoon side pairs. In many ways, Brian Zhang is a typical 8-year-old boy, full of energy and excitement. We discussed our convention card while he wolfed down a sandwich before the session.

Brian and his father had just finished playing in a morning KO, so to save time, I simply agreed to play Brian’s card, figuring it would be fairly vanilla, but again, I was surprised by what knew about the game. Brian plays 2/1, with transfers, Smolen, lebensohl, puppet Stayman, Drury, inverted minors, Ogust, unusual vs. unusual, XYZ over 1NT, Mathe over strong club openings, Jordan, Michaels, Roman key card Blackwood 1430 and a few other gadgets. I stared at the card suspiciously: Did he really understand and play all these methods?

The answer was swift in coming, as Brian began quizzing me to make sure I knew everything. I got quite a grilling, but after a few minutes of interrogation, he looked satisfied and we were ready to get started. I had never played with someone this young before, so I didn’t really know what to expect.

What I discovered right away, however, was that Brian loved to chat with everyone (even himself) and this natural loquaciousness combined with a physical energy that kept him constantly in motion charmed the opponents. Bouncing in his chair, veering from serious to silly in the space of seconds, offering commentary on everything that was happening at the table – I was exhausted by the end of the session simply from being near him for the entire time, but I haven’t ever laughed so hard throughout a pairs event. The opponents, too, seemed to have a great time, even when his antics veered on the distracting. When the smoke cleared, we had scored 51.35% and earned a fraction of a red point, and Brian had scored a new group of admirers from everyone we encountered that day.

How had Brian gotten interested in bridge? “I wanted to have some sleep-overs with my friends, so my dad told me if I learned bridge, he’d let my friends stay over,” he said. From there, Brian and other friends began attending events hosted by Silicon Valley Youth Bridge (SiVY). “We started attending SiVY pizza parties and playing a few hands, but then we moved to more serious games,” he said.

His skill as a bidder, player and writer has been influenced by his reading habits. He likes “25 More Bridge Conventions You Should Know” and “25 Ways to Get More Tricks as Declarer” by Barbara Seagram and David Bird. Brian, who will be participating in the Youth NABC later this week, has been doing well in the “adult” events. Playing with his parents and friend Wanwan Ren, the quartet won Bracket 1 of the Sunday-Monday Morning Compact KO. On Monday, they finished second in another compact KO. Thus far in Las Vegas, Brian has earned about 15 masterpoints, most of it gold. I think it’s safe to say that bridge players will hear more from Brian Zhang in the future.