Who said, “We do not learn by inference and deduction and the application of mathematics to philosophy, but by direct intercourse and sympathy”?

Interestingly, when hunting suitable quotations for these columns, this is the first I found exactly word for word credited to two different people; in this case, Henry David Thoreau and Richard M. Nixon. Is it possible that Nixon borrowed from Thoreau?

Whichever, clearly neither was a bridge player. Our game is full of inferences from which we learn information about a deal. Because someone did something, he must have this or cannot have that. 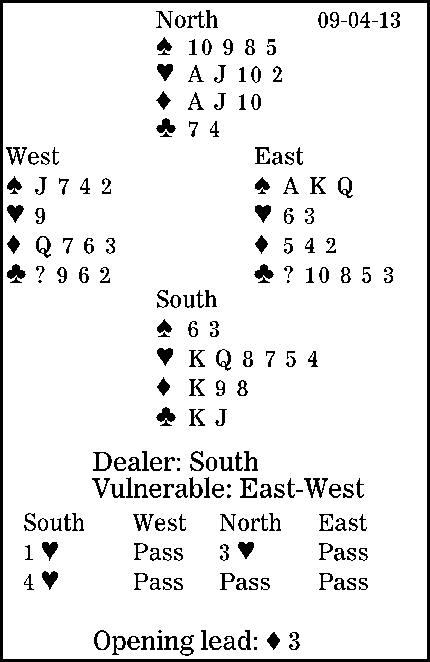 Today’s deal is a testing example of this. South is in four hearts. West leads the diamond three, dummy’s 10 taking the trick. How should South continue?

South has only nine winners: six hearts and three diamonds. He probably needs to guess clubs.

However, before doing that, he should draw trumps, cash his diamond tricks and exit with a spade. Here, suppose East wins with his queen and cashes the ace. Then his best play is immediately to shift to a low club. If he does, should South play his jack or king? Probably, though, East will try to cash a third spade. Declarer ruffs, crosses to dummy with a trump, and leads a club up. What is your guess? Why?

This is no certainty, but think back to trick one. West led from a weak queen-high suit. If he had had queen-high clubs, he might have chosen that suit instead. But if he had ace-high clubs, he would never have led it. So the correct play for declarer is his club jack.

What is a frozen suit? By David Bakhshi