Many people, including myself, play the following basic NT structure when they open 1NT:

, including 5-5 minors weak, and 5-5 minors invitational. I suggest playing 3

as puppet stayman. The responses are simple:

You may be wondering why the responses are different than over a 2N opener, where 3

would promise a 4 card major, and a 3N response would deny one. The difference here is that with 4-4 in the majors, responder would bid regular stayman (which would not be available after a 2N opener). Since 4-4 majors is eliminated, there is no need to show directly whether you have a major or not, if responder has one he can bid 3 of the major he doesn’t have, and opener can bid 3N.

So, the 2 obvious questions are, why play puppet at all, and why use these responses if you do?

To answer the second question first, the goal is for opener to reveal as little about his hand as possible. Think about the auction 1N-3

When responder has no four card major and is just looking for a 5-3 fit, the modified responses are clearly better as it will go 1N-3

-3N and no needless information about 4 card majors has been given away.

-3N. With modified responses, the auction would go 1N-3

-3M-3N, and the opening leader will know which 4 card major dummy has. That is true, and will help the opening leader if he has a lead problem, but for the entire rest of the hand standard puppet responses lose, because declarer will be known to not have a 4 card major, whereas with the modified responses the defense will not know if declarer has 4 of the other major or not. It is my strong opinion that the modified responses will work much better on average even in this situation, but I’ll leave it to you to decide.

If you agree with me, something interesting happens. Logically, you should not only be bidding puppet when you are interested in a 5 card major from partner, you should be bidding it any time you have a 4 card major and a choice of games hand! Compare the possibilities of bidding stayman with those hands vs puppet stayman:

-3M-3N. In the first auction, dummy’s 4 card major is not known to the opening leader. However, after the lead the defense will have an easier time because they know declarer has no 4 card major. This is analogous to the discussion earlier about why to play the modified responses in the first place.

-3M-3N/4M. In this case, puppet has lost because the defenders will know opener has a 5 card major rather than 4-5. The gains from 1 and 2 will be much more common than the losses from 3.

So, one reason to play 3

puppet is that it gives away less information than on hands you would normally be forced to bid stayman with. I learned this from my partner Joe Grue when I noticed him doing it and had to figure out why. The more obvious reason is that it allows you to find 5-3 major fits after opening 1N. Don’t bid puppet with 4333, as 3N will probably be best without a fit anyways, but shapes like 4342 with 2 small, or 5332 with 2 small clearly benefit from playing in a 5-3 fit, and it is nice to have a way to find it.

The less obvious reason to play puppet is that it helps your slam bidding by being able to show hand types that are otherwise difficult to show in the common no trump structure I described. Specifically, 5332 with a 5 card minor is easy to show with the auction:

This shows exactly 5332 with the minor bid, because if you had a 4 card major and a 5 card minor and slam values you would start with regular stayman followed by 3m.  On top of that, if you have a 5-3 major suit fit you will find it immediately with puppet. This is a hard hand type without puppet because if you deal with it by transferring to the minor, it becomes hard to find other fits, and that typically shows 6 of the minor. If you deal with it by bidding stayman followed by 3m, you will not be showing a slam try necessarily, and will be implying a 4 card major. Now if partner is 4-4 in the majors everything gets murky and difficult to sort out.

. If the auction goes:

This is pretty easy to sort out. Just bid 3

as an artificial slam try in hearts, and 4 of a minor shows 32(35) exactly (with 5 of the minor bid). However, if the auction goes:

The auction is trickier. You can use 4

as all slam tries for spades, but that is extremely bulky and leaves no room to maneuver. Since a slam try in spades will be by far your most common slam try, I recommend just using 4

showing 2353. This requires some memory work, but it’s worth it.

Another good hand type is (43)42. You start with puppet. If partner bids 3

, you show your 4 card major. If partner bids 3N, the auction has now gone:

4m now shows your 4 card minor, and implicitly, your entire shape. With (43)(51) you would have started with regular stayman followed by 3m, showing a 4 card major and a longer minor GF. You would still be able to find a 5-3 fit in the other major since partner would bid it twice. Being able to show your 4 card minor below the slam level is important, as often a light slam can be made in a 4-4 fit, but a quantitative auction will have you playing 4N. And of course, if you had a fit in either major, you would discover that easily after puppet.

Judging this convention on my 4 criteria that I described in this post, puppet is extremely frequent, costs little (losing 5-5 minors invite is not something I cry myself to sleep about, in fact the main cost comes when the opponents double 3

on a 1N-3N hand), is effective when it comes up (finding 5-3 fits and giving the opponents less information on normal stayman hands are both nice, and the slam hands take care of the few problem shapes, though those are infequent). The basic responses could not be simpler. The extra slam hands that are added in add a lot of complexity, but if your partnership is not ready for them then just forget about it. You will still be gaining frequently for very little memory work if you choose to do so. 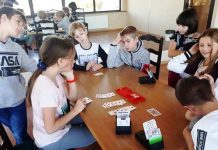 Playing as Dad taught me by Fernando Lema

19th October 2017
X
We use cookies to ensure that we give you the best experience on our website. If you continue to use this site we will assume that you are happy with it.Ok