You have led low and dummy has only low cards. Because the third player should play high, but cheaper of touching highest cards, you can draw huge inferences. 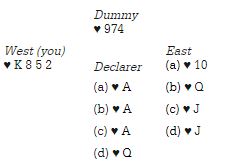 What can you as West work out about the location of the missing honours in each case? 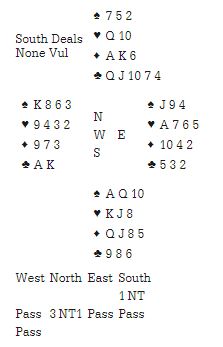 K. He then led

A. West persevered with

8, but declarer could win

A and cash his minor-suit winners. Game made plus one.

A (partner would have played

A as third hand high if he held the card). It also reveals that declarer holds

10 – East would have played the cheaper

J10. So when at Trick Two West wins

K, he must not lead a second spade, rather try to put East on play for a spade through declarer’s known

A10. Looking at dummy, it is clear for West to switch to hearts (the weakness), and he selects

9, as a high for hate lead. East wins

A and reverts to

A, then wins the second club with

If you remember one thing…

Partner’s third hand play (high but cheaper of touching highest) can tell the leader a huge amount about the layout of the suit.

When should defender play passively? Aggressively?

5th January 2018
X
We use cookies to ensure that we give you the best experience on our website. If you continue to use this site we will assume that you are happy with it.Ok