Disasters at the bridge table come in all shapes and sizes and have a habit of striking at the most inconvenient moment — usually when a posse of journalists is sharpening its pencils!

Do you like using complicated bidding systems? Or do you prefer to KISS? (keep it simple, stupid!) Although today’s experts spend many hours discussing the meaning of their bids, they can’t cover everything and the more complicated the methods, the more likely it is that the proverbial wheel will come off.

Whilst many top class players have experienced a total disaster, few have encountered more than one. One notable exception is England’s Tony Forrester, who has witnessed both sides of the coin. Look what happened when Great Britain faced Sweden in the semifinal of the 1987 Bermuda Bowl. 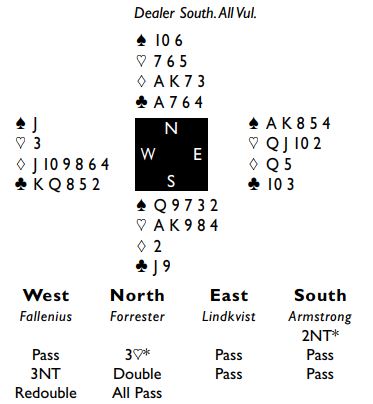 Three Hearts asked South to pass or correct, and when he passed, the fun started. West bid Three No-Trumps, thinking it would be clear to his partner that he had the minors, as he had not bid on the first round. When North doubled, East, with quite a good hand but no preference for either minor, was content to pass. West now dug his own grave with his redouble. Four Diamonds would have been much safer, and less expensive! When a confused East passed the redouble, the defenders showed no mercy, ensuring that the West hand took only one trick, and claiming a penalty of 2800 for five down, redoubled and vulnerable.

It cost a massive 21 IMPs, and put Great Britain on their way to the final. Time marches on, and we relocate to Brighton in 1996, where Great Britain is playing a friendly International against Iceland. Patrick Jourdain and I were providing the commentary, and we were disappointed that this deal was played on the one day that VuGraph was not operating. 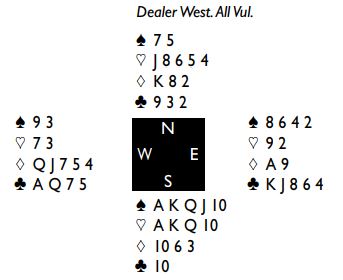 Tony and Andrew Robson were experimenting with some new ‘germ warfare’, but as you will see, they had neglected to discuss one important aspect.

Two Spades promised either the majors or the minors, usually 5-5 with less than an opening bid. The concentration of honours and the desire to test the new toy were enough to persuade Tony to open the bidding. Three Spades was to play facing the majors, but also suggested a big fit for one of the minor suits. South doubled to show a good hand, and West was on virgin territory, as the partnership had not discussed this sequence.

Alas, Robson was not on the same wavelength and reasoning that South would need some pretty good spades to stand Three Spades Redoubled, he passed. South was not too surprised to pass, and when North led the five of spades the defenders quickly took the first ten tricks to inflict a penalty of -3400. That’s a sizeable number, but don’t leave your seats just yet —our final deal is even more explosive!

A player I know collects bridge scores in the same way that other people collect stamps. He records them all in a book that is getting a little bigger each year. He only counts scores recorded at his table, and his ambition is to collect every possible result – I’ll leave you to work out how many that will be! Scores like +1100, +1400 and +1700 are commonplace. but our hero will doubtless have to wait some time before he matches the score on this deal! 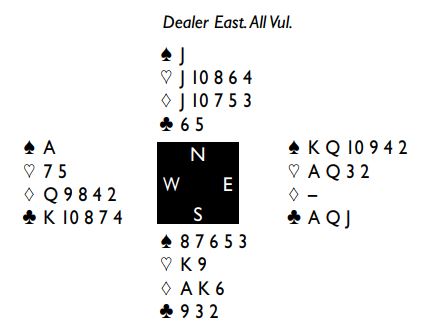 This looks an innocent enough deal, the main interest appearing to centre on whether East/West can reach a contract of Six Spades. However….

The bidding requires some explanation! East’s opening bid was Precision Club, promising 17 or more points. Roman Smolski, one of the best card players around, is renowned for his flights of fancy in the bidding. Playing with the writer, he once fearlessly overcalled Seven Clubs after the opponents had bid 2NT — 6NT! The bid was alerted and on enquiry I explained “I think we play Asptro over No-Trumps!”

Here his overcall promised spades and diamonds or hearts and clubs. It is generally a good idea to get involved when the opponents open with a strong club, but this hand was hardly ideal, given the disparity in length between the suits, its strength, and the vulnerability. Still, when West bid Two Diamonds it looked as if no great harm had been done.

However,Tony Sowter knew he had a tremendous fit for one of the suits his partner was known to have, and West’s bid, promising at least five diamonds, surely made it a racing certainty that Smolski had clubs and hearts. When he jumped to Three Hearts, trying to make life difficult for his opponents, East doubled for penalties. Smolski’s retreat to Three Spades said his other suit was diamonds, and East doubled again.

Sowter should have gone back to diamonds, but just in case his partner was ‘operating’ he preferred an ‘SOS’ redouble. When Smolski passed, the stage was set for what may still be the biggest score on record. It quite often happens when you are defending a silly contract that the odd trick disappears, but that did not happen here.

West found the excellent lead of the ace of spades and switched to a diamond, ruffed by East. He now drew all the remaining trumps and switched to clubs. When West played the last club, South was squeezed in the red suits and in desperation blanked the king of hearts. East took the last two tricks and as the other three players were trying to work out the score Smolski calmly informed them it was -5200!

Had he been there before? When Smolski’s teammates came back to compare scores, they proudly announced their score of +1460 on this board. Well done’. said Smolski. The overtrick saves a point!’ We only lose 23 IMPs”.

Take a look at this deal from the semi-final of the 1989 Venice Cup in Perth between the Netherlands and Germany. 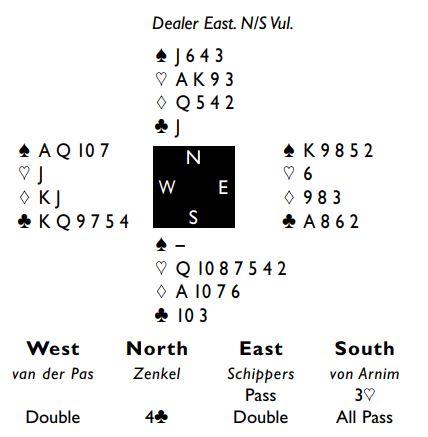 Three Heart was a two- way bid, promising either a preempt in hearts, or a solid club suit. When West doubled for take out of heart. Sabine Zenkel (now Auken) bid Four Clubs. She knew that if West had passed, this would have asked her partner to pass with clubs, or otherwise correct to heart. When East doubled, Daniela von Arnim, imagining that in view of West’s double, her partner’s bid was natural, passed.

North now assumed South had clubs, and she too passed. If a trump had been led, declarer might have been restricted to one trick, but East preferred a spade, and Auken was able to scramble four, via two ruffs in dummy, and two aces. In the cold light of day, West had made a take out double of hearts, and East had doubled clubs for penalties.

Was it still possible for South to have a solid club suit? Both the German players regard this deal as their worst moment, and the bridge gods took their time before forgiving them. They had to wait until 1995, when they were members of the team that captured the Venice Cup in Beijing. All the disasters you have witnessed arose because the players concerned were using complex methods.

QuickQuack, Quock Or the true value of a ten by Red Jack

Best hand of the 2013 USA Trials? by Michael Rosenberg

17th October 2017
X
We use cookies to ensure that we give you the best experience on our website. If you continue to use this site we will assume that you are happy with it.Ok