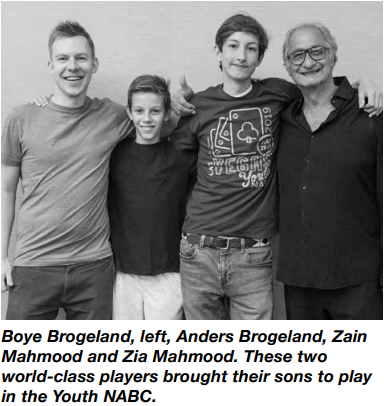 It’s their first time playing in a Youth NABC, but these players already have famous names. Zain Mahmood and Anders Brogeland are the sons of world champions Zia Mahmood and Boye Brogeland.

Both learned bridge young. “I’ve been playing all my life,” said Zain, 18, of London. It started so early he didn’t have much of a choice about it. “It was mostly my mom. My dad would try to teach me and would go straight to the advanced stuff.”

Zain’s mother, Emma, started him out on other trick-taking games at first – no bidding. He doesn’t remember when he started learning that. But by the time he started playing in proper games at 13, he had a solid understanding of bidding.

When Anders, 14, started learning at age 7 in Norway, he didn’t need anyone to talk him into it. “I wanted to do it,” he said. When he started playing, his initial impression was that it was a lot of fun. “I play sometimes on the internet and once a week in the club.”

Zain was playing once a week while he was in secondary school at Eton College outside London, but he graduated recently and hasn’t been playing as much since. He also plays online on FunBridge. He’s been to tournaments in France and won some at school, but it’s his first time at an American tournament.

Anders has also been to European tournaments and played at the 2017 Fall NABC in San Diego, where he picked up 3.71 platinum points in the Keohane North American Swiss Teams. Last year, he won the Kids Pairs at the European Youth Championships.

Zain and Anders have known each other for six years, but the last time they were at a table together before last week was five years ago in Biarritz, France, where they played one round against each other in a team event.

They recently formed a partnership and have hit it off with great results, playing in 299er games before the Youth NABC started. Last Friday, in their first game, they scored 72%. They played again Wednesday night and won again with 65.8%.

The ACBL’s Stephanie Threlkeld, who oversees the Youth NABC, found out how well they play first hand. “I played against them in the I/N room and they creamed us,” she said. “They were very nice but they beat us unmercifully.” Here are a couple of deals from Wednesday night’s game. 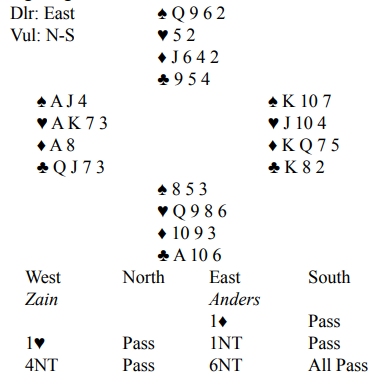 After Anders opened and showed a balanced minimum, Zain made a quantitative raise, asking Anders to go to slam if he was at the top of his 12– 14 range. Despite holding a flat, aceless minimum, Anders accepted. South led the

A and continued with a club. Anders won the king and cashed two more clubs, pitching a spade. North discarded the

3. Anders then played three rounds of diamonds, pitching a heart (and South a spade). He then finessed a heart and, when it held, cashed two more hearts. On the last heart, North was squeezed in spades and diamonds. He let go of his diamond winner, making declarer’s

7 good for the last trick. They tied for a top on the board. 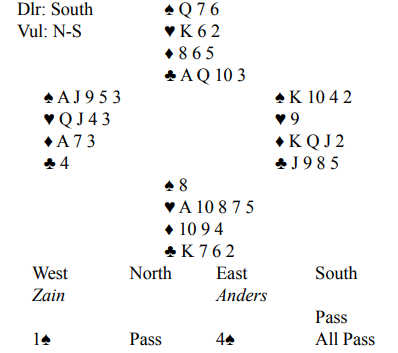 North led a low heart to the ace, and a heart came back to the queen, king and a ruff. Zain now played a spade to the ace and guessed to finesse to the

K, he ran four rounds of diamonds, pitching his lone club. South let go of too many hearts, so Zain scored the

4 at the end for 12 tricks and a cold top. Anders said he likes playing with Zain. “He’s good.”

23rd September 2019
X
We use cookies to ensure that we give you the best experience on our website. If you continue to use this site we will assume that you are happy with it.Ok