When most of us were taught the basics of bidding, we learned that the magic number of combined cards in a suit to make it a desirable trump strain was eight.  Toward that end, we raised partner’s 5-card major suit openings holding three card support, but resisted raising partner’s minor suit openings without four or usually five of them. That’s fine advice, and quite sound.  From the other side of the table however, it’s my experience that very few beginner and intermediate players will raise responder’s first bid major without four card support. After all, they note, responder will often hold only four of his major (bidding up the line), and raising him will only serve to mislead partner that you’ve unearthed a 4-4 fit when it’s actually only a 4-3.  Those players invariably choose to rebid 1NT rather than raise.  Many of them play a convention known as New Minor Forcing so that opener can check back for three card support if interested. I even know players who agree to respond 1

to hands where they hold at least five. While this approach might ease opener’s anxiety about raising partner’s major with only 3-card support, it adds an (unnecessary) artificial component to what could be a simple and effective natural bidding system.

Let me be clear about what I’m suggesting here: I think opener should raise partner’s major suit response holding three card support unless he has exactly 3-3-3-4 shape – i.e. whenever he holds a ruffing value in a side suit. Let me illustrate with a few examples:

If you were thinking about rebidding 2

or 1NT, don’t tell anyone, it will be our secret.

Prefer to raise with GOOD 3 card support over rebidding a poor 6 card minor.

c) This one is tricky. At IMP scoring with a good 6 card suit I’d bid 2

. Telling partner about a source of tricks is rarely wrong.

This is one of the two exceptions to raising. Never bypass a 4 card spade suit to make a 3 card H raise.

e) 1NT   Despite holding no diamond stopper, having no ruffing value and only 3 card support, you won’t suggest a heart contract unless partner insists on it later.

This is probably a significantly different approach to the way you usually bid.  Since I’m advocating playing in a 4-3 fit occasionally, you might reasonably ask why it’s better than playing 1NT.  Sometimes it won’t be. Sometimes No Trump will take the same number of tricks. Sometimes trumps will break 5-1. Still, I expect your results to improve overall with this adjustment. Here is a short list of reasons why raising is better than bidding No Trump:

But those are only the benefits when you raise.  When you bid 1NT instead, the inferences can be even more valuable.

, I raise. Some players prepare for a comfortable rebid by choosing to open those hands with their 4 card diamond suit, but I don’t recommend it.  It solves one problem, but creates others.

So now if I’ve convinced you to raise with 3-card support and ruffing value, all that remains is modifying responder’s rebids after the raise: 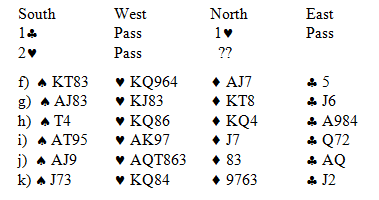 You don’t care if partner has three of four hearts. There is no slam, and 4

rates to be better than 3NT.

g) 3NT Partner will correct to 4

This is a cue bid of some sort. Partner will wonder why you didn’t make the cheapest cue bid of 2

A, partner should bid 3

. Holding a slower spade stopper, and only 3 hearts, partner should bid 3NT. With a positional double stop like

Much like last time, partner’s first responsibility is getting to the right game.  Partner should bid 3

A or 2NT with a slower diamond stop.

Partner may not know it yet, but hearts will be trump. 2

is an advance cue-bid.  If partner can cue-bid 3

Next… we will examine some techniques on how to play those 4-3 fits for all the matchpoints when you end up there.

Never Finesse Against Your Partner by Schmuel Lev