In past articles, I have been promoting the advantages of raising Partner’s 1st response of 1 in a major with only 3 card support, assuming you (Opener) have a ruffing value somewhere. Although the advantages outweigh the disadvantages by a wide margin, there are still going to occasionally be some hands where someone is going to have to play in a 4-3 trump fit. To understand the difference between playing in an 8 or 9 card fit and playing in a 7 card fit, we need to have a short discussion of basic probability.

When you hold 9 combined cards in a suit, (4 outstanding) the missing cards will split:

When you hold 8 combined cards in a suit, (5 outstanding) the missing cards will split:

When you hold 7 combined cards in a suit, (6 outstanding) the missing cards will split:

Alternatively, when playing in a 4-3 trump fit, we must assume that the trumps will break 4-2.  Naturally, if the only chance we have to make our contract is a 3-3 trump division, we’ll play for it, knowing that it’s only going to happen about one-third of the time. However, if we can come up with a plan to cope with a possible 4-2 trump break, we will be successful a whopping 84% (48% + 36%) of the time.

This translates into the most general principle in playing a 4-3 trump fit:

You must resist trumping from the 4-card holding.  If you do, (since one of the opponents rates to hold 4 trumps), you will often lose control of the hand. 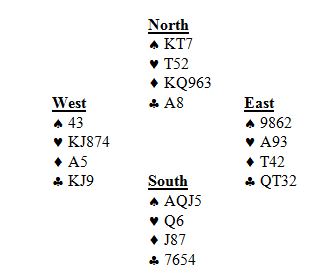 A and returns the

9. West wins and continues with the

South must resist the temptation to trump the 3rd heart, and instead pitch a club. West can not profitably continue hearts, so switches to a club. South calls for the

A from dummy and must knock out the

A before drawing trumps.

As the cards lie, South cannot lose more than 3 hearts, 1 club and 1 diamond.  If he carelessly trumps the 3rd heart, when he attempts to draw trumps, East will remain with a long spade and will ruff in on a diamond trick. After that, the defense will take the rest of the tricks. South will likely end up down 2.  Note that 1NT would fare no better. The defense would take the first 5 heart tricks and switch to a club. The defense will score 5 hearts, 3 clubs and a diamond for down 3 unless South cashes out his 5 tricks to get out for down 2.

, North will score 5 diamonds, 4 spades, 1 club, and an eventual heart ruff in dummy. (After drawing trumps, North will pitch a club on the 4th spade.)  In 4

, South must exercise more caution. The defense starts with 3 rounds of hearts, and South simply pitches a club from hand. The defense has no reply. South can draw 4 rounds of trumps, and come to 10 tricks. If South ruffs the 3rd heart, the likely 4-2 trump split may doom the contract. The defender with 4 trumps will trump the 4th diamond lead and play another heart. No matter which hand ruffs the heart, South will be unable to both draw the last trump an enjoy the 5th diamond.  South gets a well earned top for 620.

Gleaning clues from the bidding and play II By Omar Sharif