Michaels Cuebid is an interesting competitive bidding convention played by experienced players that has many follow-ups and treatments. Let’s look at some of the most common. 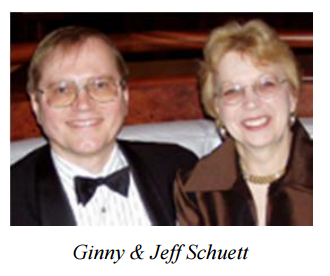 Remember the bidding that starts (1

1) In the first three sequences, the responder to the cue bid can jump in any known major to invite game, usually done with 9-11 HCP and good fitting cards. But in the last sequence, where the bidding starts (1ª) – 2ª, responder cannot jump. There isn’t room. Experienced players use the 2NT bid to ask about the minor suit, and then go back to 3© with the invitational hand. For example:

2) If the opening bid is a weak two, then the overcaller may still want to use Michaels if he is holding a good hand, in order to reach the proper suit.

Experts have determined it is best to leave the three -level open to try to reach 3NT and use various forms of Michaels cuebids at the four-level to reach a major or rarely a minor suit game.

Cuebids at the three-level are a form of the Western Cuebid which asks partner to bid 3NT with a stopper in opener’s suit.

For example, if East starts the bidding with 2

, South who is holding

AKQJT54 doesn’t have the room to show such a good hand in time to keep 3NT in the picture by using a double and then bidding clubs to show a strong hand.

So bidding that starts (2

Leaping Michaels The form of Michaels used is called Leaping Michaels and starts a game forcing auction. It is used over opponents’ preemptive bid when holding a two-suited hand. The overcaller leaps (also called “jumps” or “skip bids”) to four of the minor, implying at least five in the unbid major suit.

For example, with bidding starting with two spades by East, South holding:

AQJ94 would jump to four clubs, which shows at least five hearts and at least five clubs and a strong hand. Partner can bid 4© with three or more hearts or raise to 5

with a club fit, or – which is rare – pass with a misfitting weak hand.

opening, the overcaller can bid 3

to ask for a diamond stopper to try to reach 3NT, or can bid 4

to show a good hand with 5+/5+ in the majors, so partner can pick the right major suit as trump.

AKQJT54 to ask for a diamond stopper, or bids 4

With weaker two suiters, just overcall the higher suit, and hope to get a chance to bid the other suit, unless partner supports the overcall.

A Balancing Act by Jim O’Neil