When faced with an opening lead against a suit contract, few defenders can resist leading a singleton in a side suit. At times it can be very effective, but not always, especially at matchpoints.

When trying to determine whether or not to lead a singleton, there are two very important factors to consider:

1. Can I get partner on lead to give me the ruff?

2. Will I have any trumps in my hand by the time partner gets the lead?

Of course, if partner holds the ace of your short suit, neither issue will be a problem. When the opponents hold that card however, you will have a lot of work to do. With that in mind, if you have a singleton in a suit partner has opened or overcalled, it stands out as a strong candidate for your opening lead.

Of course, if partner holds the ace of your short suit, neither issue will be a problem. When the opponents hold that card however, you will have a lot of work to do. With that in mind, if you have a singleton in a suit partner has opened or overcalled, it stands out as a strong candidate for your opening lead.

The lead is so popular, that if you decide to lead an Ace in a different suit, (even if it is from Ace-King), and then shift to your singleton, you run the risk that partner will return your first suit, even though you wanted a ruff in the second. Many experienced players follow the ancient rule: “If you don’t lead it at trick one, it’s not a singleton”.

For obvious reasons, this is not always true, but our goal as a good defender is to make life as easy as possible for partner, and partner is far more likely recognize a singleton led at trick one than one led at trick two. Okay, so we agree that leading a singleton in partner’s suit is generally a good idea. But what about when it is NOT partner’s suit?

What about when it is one of the suits bid by the opponents? Now it is far less clear. When you lead a singleton in a suit NOT bid by partner, it is quite likely that the opponents will hold several cards in that suit. It is probably a suit that the opponents will eventually want to develop, and your lead will help them to place the unseen spots and honors. For example, if you lead an 8, declarer will almost certainly assume the 9 is held by partner if it is in neither his hand nor dummy’s. If declarer is able to draw trumps, your short suit lead will not only help him play that suit to its maximum advantage, but it may also give up a key tempo in establishing tricks in the defense’s best suit(s).

Therefore, holding a control (an ace or a king) in the trump suit should be a key component in deciding whether or not the short suit lead will be effective. Another major thing to consider is whether or not the defender with the short suit may be giving up a natural trump trick with the ruff. Also, if the defender has four or more trumps, it is usually more effective to play a forcing defense (forcing declarer to ruff YOUR long suit), and eventually lose control of the hand, than to attempt to get a ruff or two yourself.

Let’s look at a few examples: 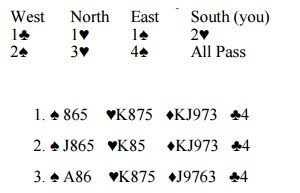 5. Nothing suggests that declarer won’t be able to draw trumps, then run clubs. Don’t make it easier for him. Try to establish a possible heart winner before it goes away.

5. You are hoping dummy comes down with three or four hearts, in which case you may be able to weaken declarer’s trump holding enough to make your red cards winners in the end.

4. You have a trump control, and a reasonable chance that you can get partner on lead with a heart later. This is the perfect time to lead a short suit.

8. You have a trump entry and club shortness. The problem is that you also have 13 high card points. Assuming the opponents have at least 25, you can’t hope that partner has as much as the

K. Make a passive lead and try not to give anything away.

K. You can’t hope for more than one diamond trick, and it could vanish quickly. Spade tricks aren’t going away. If dummy comes down with a singleton or doubleton diamond, switch to a club unless you see strong clubs and weak spades in dummy. Leading the spade is for dreamers.

6) This one is tricky. At IMPs, I would lead the spade and hope to get a diamond, a heart, a spade ruff, and another trick somewhere. On a great day, you might even catch partner with both pointed aces.

At Matchpoints, I’d lean toward leading the

9, hoping to bank a diamond trick before it goes away on spades. In other words, a spade is your best chance to beat the contract, but a diamond might be your best shot at cutting down on overtricks.

26th December 2017
X
We use cookies to ensure that we give you the best experience on our website. If you continue to use this site we will assume that you are happy with it.Ok