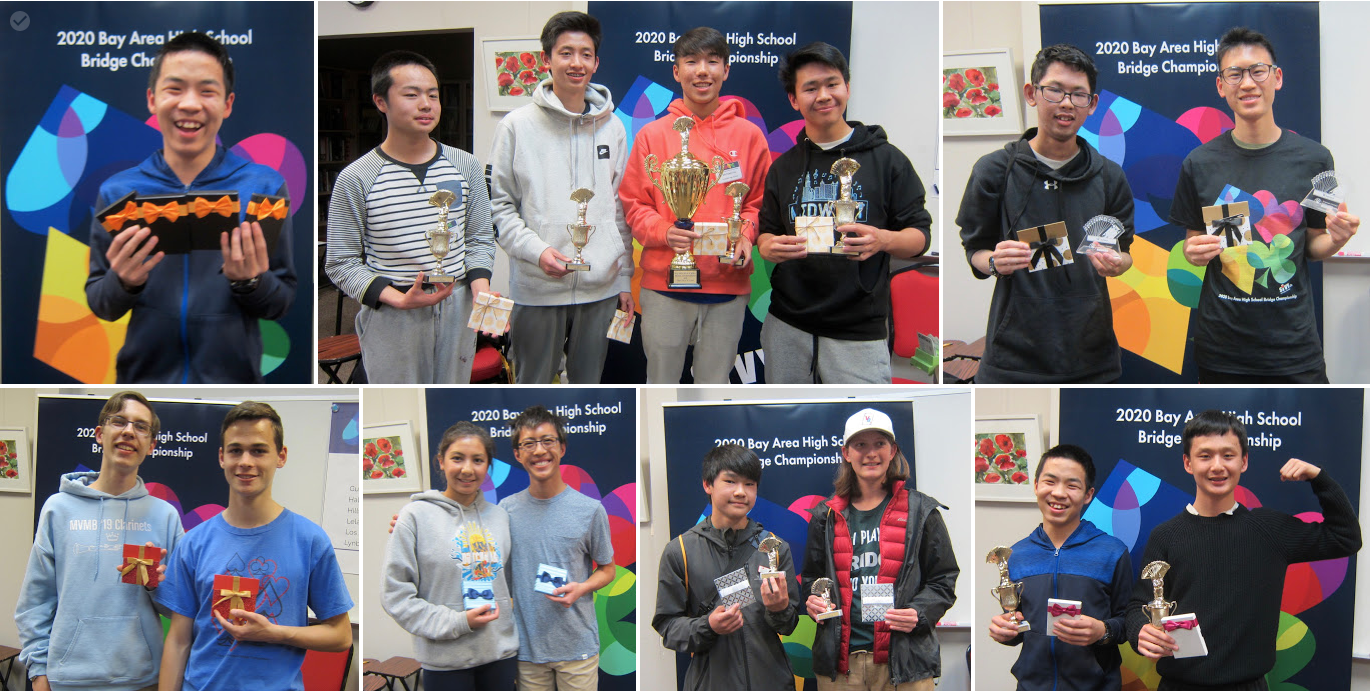 Winners of the Team Championship for the second straight year were Lynbrook High School, with the Menlo Knights taking second place. Winning the Pair Championship were Jonathan Yue from Leland High School and Michael Xu from Gunn High School. Many participants attended training provided by Sarah Youngquist, a longtime SiVY member and volunteer.

Six teams played in a round robin of five rounds of five boards each to determine which teams would advance to the finals. At the end of the morning session, Lynbrook High School came out on top in the round robin. Menlo School finished second.  After lunch, these two teams advanced and faced off in a twenty-four board match while most players who did not advance competed in the championship pairs game.

Michael Hu attended SiVY’s inaugural pizza party back in May of 2013, and his longtime partner Arthur Zhou joined SiVY at its first summer camp in 2014. The two of them now teach bridge and recently taught their third session of beginning bridge classes through Silicon Valley Youth. One of their students, Liao Zhang, represented Lynbrook High School in the first year that they were able to field two teams. Liao demonstrated his impressive ability to articulate the reasoning behind his bids after just ten classes with Michael and Arthur at Sarah’s practice session. The Lynbrook Team were the proud winners of the championship, taking home the trophy and scholarship money. 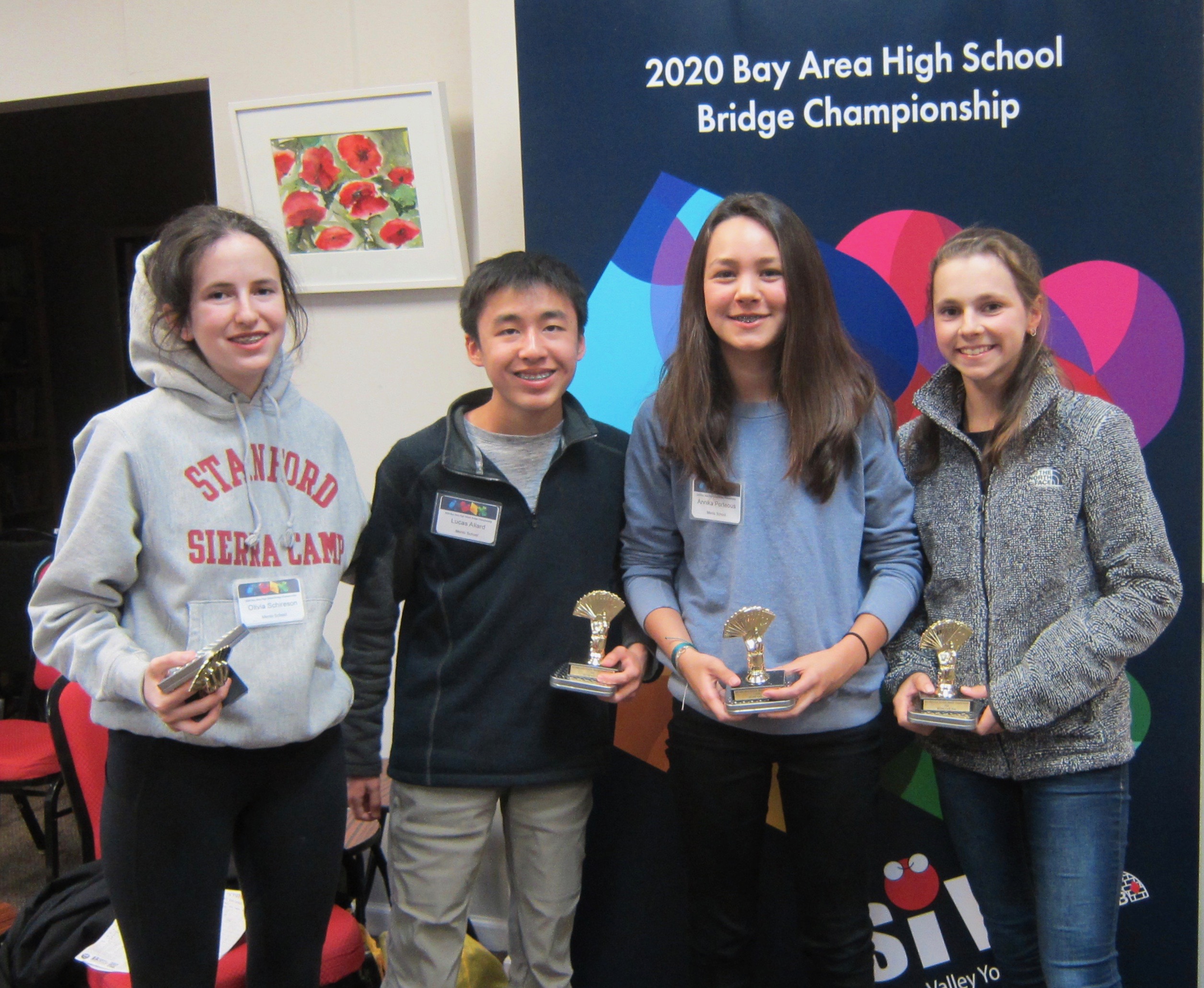 Freshman Olivia Schireson, who joined SiVY in 2015, started a bridge club this past fall at the Menlo School. She attracted many brand new players—at one point during the practice session, Olivia broke off with her Menlo kids to review some basic bidding points that they hadn’t gotten to yet. Olivia and her team were proud to finish in second place in the team event.

Other new players attended the training as well. There Jonathan Yue, an experienced SiVY player, kibitzed and mentored Andrew Lihn whom he had taught bridge just a month ago at his school’s bridge club. Andrew and Jonathan are both members of the Leland team for the high school tournament and came in third in the team event. Jonathan played in the Pairs Championship, winning first place with Michael Xu, a SiVY member for the past four years, who attends Gunn High School.

26 players from 11 high schools participated in the Pairs Championship.

First place prizes were awarded in memory of Belle Bestor, a life-long bridge player who inspired her children to become Life Masters.

Special appreciation is due to volunteer tournament director Will Watson, as well as Qing Lu, who put together a fabulous lunch for players and volunteers alike. Thanks go to author Larry Cohen for donations of playing cards, Bridge Winners for hats, as well as Master Point Press and Baron Barclay for deep discounts, and the ACBL. As always, thanks are also due to the many volunteers who make all SiVY events possible. 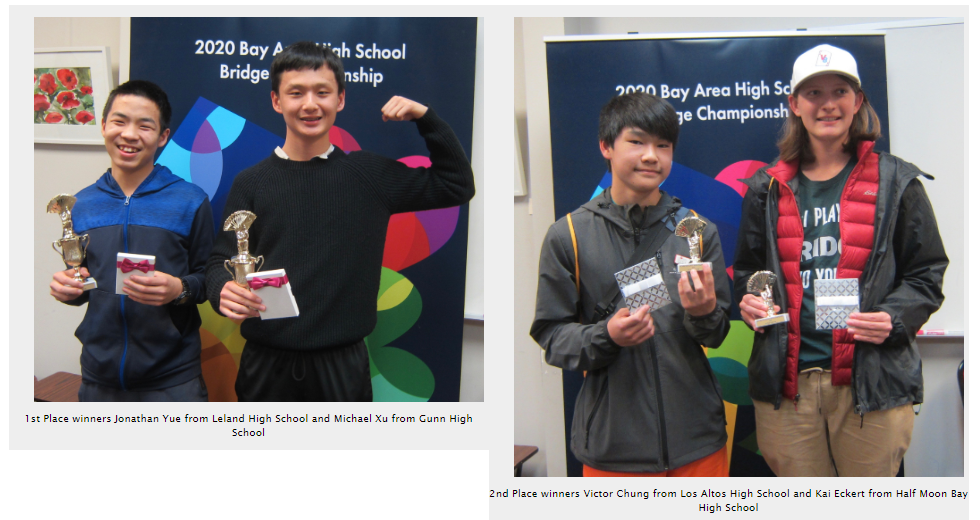 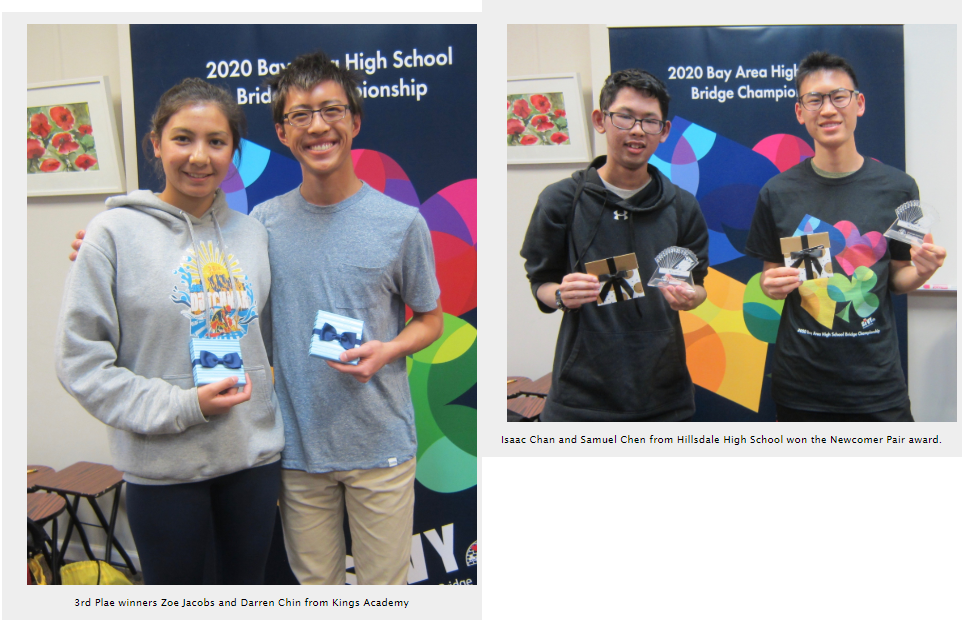 21st March 2018
X
We use cookies to ensure that we give you the best experience on our website. If you continue to use this site we will assume that you are happy with it.Ok