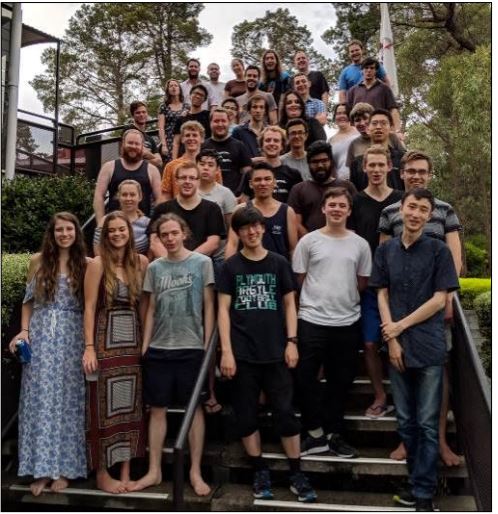 The Interstate Youth Teams at the Hobart ANC was my lastever tournament as a youth, and one of the best. It had been three long years between ANC appearances for me. SA won the last one I played, in Perth, despite my partner’s hospitalisation with appendicitis on day 2.

Before heading to Hobart, I proposed that my partner this year have his appendix removed as a precaution, which he refused to do. Luckily, we fared well this year – everyone returned to SA with all their body parts.

I still remember the first time I played with my partner, David Gue. It was years ago. Early in the session, I bid 6NT and at trick 2, led a low card from my hand towards four small in dummy to rectify the count for a squeeze. The look on his face was classic! Thankfully, he had more faith in my declarer play in Hobart, including in this 3NT against Victoria: 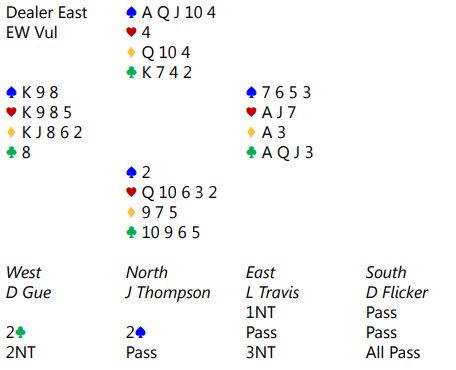 Looking at dummy, North felt pessimistic about his chances of defeating the contract but decided to set up his spade tricks by continuing with the

7, giving me some insight into the diamond suit, and I won in dummy then led a heart to the

South returned a heart to dummy’s

8, with North feeling the pressure and pitching

2. I finessed the club then cashed the

A, North discarding the

4. Now I took stock of the hand. North started with 5 spades and 1 heart, and I was pretty sure he had the

Q. He had discarded one club and followed to one, then refused to part with one. This suggested he only had

K-x left. The remaining cards had to be: 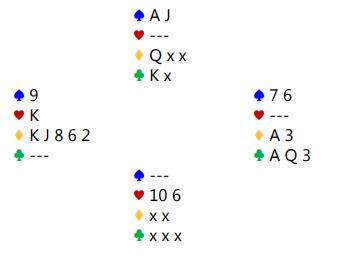 A to unblock the suit, then exited a spade to North. He could take his spade tricks, but then had to give me a finesse in a minor suit, providing my ninth trick. I recovered from playing too quickly on this hand in the final to perform another end-play: 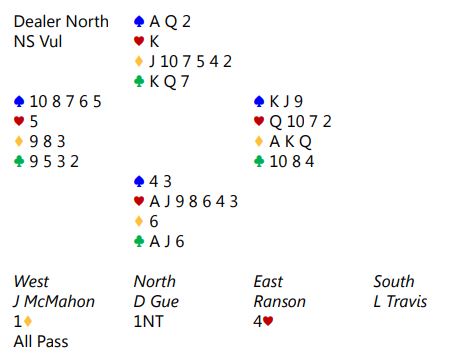 , which should be easy to play since I can place every missing point with Ranson due to his 1NT overcall. A better line than mine would be to win the club in hand and play a diamond, planning to shorten my hearts and trump coup Ranson. However, I won the

K in dummy, cashed the

K, crossed to the

J and cashed the

A. I had guaranteed myself 2 heart losers to go with the diamond, so I couldn’t afford to lose a trick to the

K, which I knew was off-side.

A to remove Ranson’s potential exit card, then played a diamond to the

A, which I ruffed in hand, then I exited the

10. There was no answer to this – he cashed the

Q but then had to lead

K, establishing dummy’s diamonds, or a spade into dummy’s

A-Q. It was a good thing I made – in the other room, Matt Smith never bid his hearts as South, instead scoring up +500 against 2

The young SA Youth Team put up an excellent fight, but at the end of the 60-board final, NSW were victors, scoring 139.31 IMPs to our 120. Congratulations to the ‘Boys in Blue’, who played in the right spirit and made it a highly enjoyable match. Watch out next year though – with this experience under their belts, SA look forward to going one better. As it is, I’m sure our (mostly) young team’s silver medals will be going straight to the pool room.