When partner opens a suit in which you have four cards, there is a certain fit. Whilst occasionally it is acceptable to withhold support for a minor suit in order to introduce a good major suit, it is a golden rule that you must support a major suit immediately. You can show your strength by the level you support; and by telling partner immediately which suit is trumps, you enable him to concentrate solely on how many tricks to aim for, not to worry about which suit to play in; indeed if you fail to support he will never believe you have such good support.

This week’s hand illustrates yet another reason for supporting immediately. North learnt an expensive lesson. 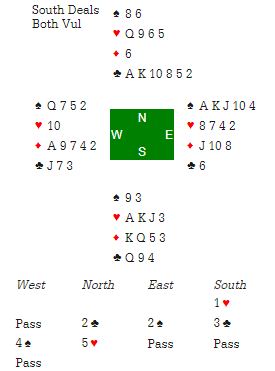 North cut his losses by bidding on over 4

– a contract that would probably have succeeded. West led

, and the contract was quickly scuppered. East won

A, then switched to

A. Declarer made the remainder by winning West’s

If North had resisted the temptation to introduce

s – and what was the point when he knew

s were going to be trumps – then the result would have been very different. In support of

s North is worth 4

, and East would hardly feel safe to introduce his

s at such a high level. In all probability North-South would buy the hand in 4

THE RULE OF FOUR: Support an opening bid immediately when holding four (or more) cards.

When they Redouble by Mike Lawrence

Breakin’ the Rules — Walking the Dog by Joshua Donn