Occasionally when you and your partner are in the midst of doing some fine tuned
slam bidding, venturesome opponents decide to interfere. Usually they are
attempting to find a sacrifice that will prove profitable versus your likely slam, but,
in addition, they are making your bidding more difficult. These types of actions
occur at high levels and at favorable (for them) vulnerability. While their attempts
may prove fatal for them (bridgewise that is), it’s also a very real imposition to
your positive slam bidding. All players at the table need to attempt to calculate
possible damages and assess the advantages and disadvantages of continuing to bid
and/or of deciding to defend. Example: 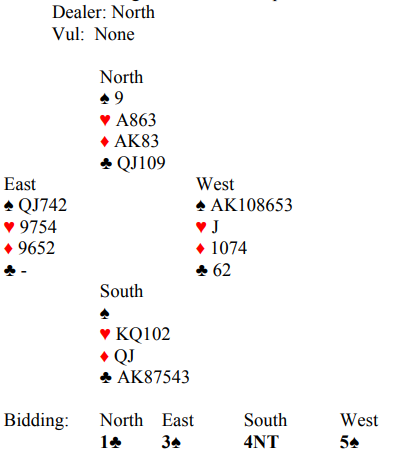 ’s. Now North has a dilemma. He can double and find out later that E-W were down only two for a paltry score of 300 points. Or he can bid on to slam in clubs for a hopeful score of 920. Before North decides to double in situations similar to this, he would like to be certain that the result of this double is best that N-S can do on the board. In the example above, the double would serve no purpose as North is anything but certain and South would have to assume that the double by his partner is a penalty double and thus would subsequently pass.

On the other hand, if North would like to continue to explore for a slam in clubs, the problem is how to show his Aces….with the traditional method being to pass with no Aces or bid the cheapest suit possible that contains an Ace, and so on up the line. This method is quite obvious lacking so bridge players have devised their own conventional means for showing Aces. These conventions and/or methods are explained below. They are not complicated or involved with a lot of memorization, but bridge players do need to choose one convention for such situations.

DEPO stands for Double Even-Pass Odd. Using this convention, a double shows an even number of Aces ….zero, two or four. Pass shows an odd number of Aces…one or three. Using DEPO in the above example North would double to show an Even Number of Aces.

DOPI stands for Double Zero-Pass 1. A Double would show zero Aces and Pass would show only one Ace. To show more than one Ace you would continue bidding up the line with each new bid showing an Ace. Thus, in the example above, since North has two Aces so he would bid 5NT. If North had three Aces, North would bypass 5NT (which shows two Aces) and bid 6

to show three. As you can DOPI should really be D0P1.

Listed below are a few others dealing with doubles and redoubles. These meanings are associated with regular Blackwood but they, too, can be adjusted for use with Roman Keycard Blackwood.

PODI stands for Pass Zero-Double 1. A Pass shows zero Aces and a Double
shows one Ace. PODI is just the opposite of DOPI in showing zero or one Ace, but
otherwise the convention remains the same. Actually PODI is really P0D1.

RIPO (R1P0) is just the opposite of ROPI……Redouble shows 1 Ace, and Pass
shows zero Aces.

Some logic should be used to decide when to use DOPI or when to use DEPO when the opponents are bidding the one-under suit. If the auction goes 2

:
Double and pass should show zero or one keycard (depending on whether you play 1430 or 3014 responses). However 6

should show two keycards. Responder could hardly expect opener to have three keys and Opener could just as easy have zero or two keys. Use DOPI (but don’t show the queen)

On the other hand, if the auction goes:

Two with the queen might not be enough for slam
so Depo should be used here. AQxxxx/x/x/AJxxx opposite Kxxx/xxx/KQJ/KQJ
June 15, 2015

11th September 2017
X
We use cookies to ensure that we give you the best experience on our website. If you continue to use this site we will assume that you are happy with it.Ok