OK, this week I’m back with a new convention. This convention occurs when our side opens a weak 2-bid in spades.

response. This uses the same philosophy behind Kokish relay auctions. For those of you who don’t know the Kokish relay, 2

shows either a big balanced 24+ HCP hand or hearts. Then responder relays to 2

opener either bids 2NT showing the big balanced hand or bids at the 3-level to show a hand with primary hearts.

Now, standard Kokish treats the 3-level new suit rebids as natural with primary hearts. However, the common expert trend in Kokish is to “switch” the meanings of 3

shows a single-suited hearts hand and 3

. In my opinion, there are many auctions in both 2/1 and Precision where this “switch” principle provides a huge advantage, saving space by using the 3

bid to show hearts and the 3

bid to show clubs. The reason is that partner can now support you at the 3-level with a 3

bid. Meanwhile, you don’t lose much when you show clubs with 3

. When partner has support, they would already have to bid 4

anyway. I will go into the many other auctions and an even better Kokish relay system at a later time if people are all that interested, but for now I will try to stay on topic!

Anyway now that I’ve clarified the 3

switch principle, one of the auctions where this applies is when partner opens a weak 2

call to show a game-forcing hand in clubs. Some would say that if you go past 3NT, then 4

is a playable contract even though it isn’t game, but that’s up to you and your partner. The big gain comes when you have 6 bad hearts or 5 good hearts that’s close to a game force, but really needs a fit to do so. I will now describe how Jlall and Curtis and I handle these auctions.

it shows game-invitational+ values and 5+ hearts. Opener bids over this as follows:

Now that leaves us with what to do with most of our hands that fit hearts well. First, we can simply jump to 4

call that would be a splinter in support of hearts, promising high honor-third of hearts or better.  For example:

I could show you many examples of good hands, and most of you would laugh at how good the hands are, saying you would never open those hands with a weak 2

. But I like to play sound weak twos, I feel like Brad Moss and I are the last two people on earth that have this style, and maybe we are crazy! (Well, I guess it’s a well-known fact that we are!)

Here’s a hand showing the switch principle and our followups in action: 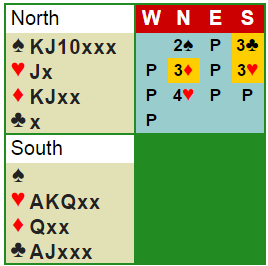 and Curtis had a hand that might PASS in standard bidding. He has a good hand but not a game-force, and the hand could play really badly if the deal is a misfit or if I’m minimum. However, we were playing switched 3

, so Curtis could now bid 3

. I showed my heart tolerance and Curtis was able to invite with 3

, which I accepted. We won a vulnerable game swing when the other table passed it out in 2

A Singular Lack of Finesse by Beverly Kraft – Eric Kokish

26th September 2019
X
We use cookies to ensure that we give you the best experience on our website. If you continue to use this site we will assume that you are happy with it.Ok