Dear friends, dear all, wherever you are.

Good afternoon. I am very pleased and honoured to be here with you, being kindly invited, and I am glad to thank the organizers for this opportunity given to me and to congratulate them, the University of Sterling and in particular my dear friend prof. Samantha Punch, the “deus ex machina” of this Initiative. They made a great job and I wish them a great success, as they have already achieved in their fundamental research about the beneficial effects of bridge.

Bridge is the most widespread and popular card game in the world and counts a number of players larger than that of any other game. 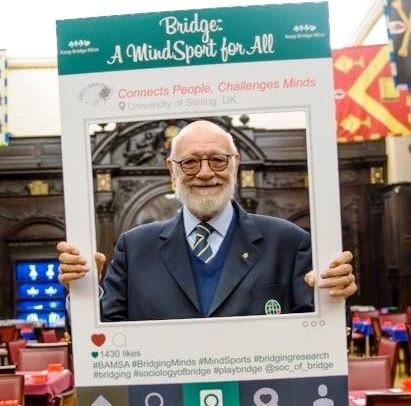 The reason for this success is linked to the fact that Bridge is a universal game that can be played by anyone, anywhere, in the same language and the same technique, without particular tools, since all you need are just four people and a deck of cards.

The cards represent, unique case in the field of games, only the instrument needed to carry out tactics and do not constitute a fundamental element of the game. Today, as you know, with the modern technology, the game is normally and usually played also without cards, at a distance, with a simple computer and four players in different places.

We love to say that Bridge is Hobby, Sport and Culture.

Hobby, obviously, because it represents a recreational pastime, a game in the most complete sense of the word.

Sport. Bridge is a Sport fully recognized by the IOC since 1994 and has been already proudly included in  the Olympic Asian Games together with all the other sports since 2018.

Bridge represents an irreplaceable workout for exercising the brain and it is probably for this reason that it is defined as the ultimate sport of the mind.

But it is not only a sport for the brain: it requires particular concentration, fighting spirit, quick reflexes and stamina: qualities only achieved through physical fitness.

It should be highlighted, also, that in the important competitions, that require practicing ten, twelve hours a day for ten to fifteen consecutive days, the stress is not just psychological and that aptitude to effort and resilience must be reviewed under a purely physical perspective.

Culture. Bridge is substantially about socialization and aggregation, since its fundamental nucleus is composed firstly by the couple and then by the four players.

Bridge is different to other mind sports like chess, in which the ultimate objective is to defeat the adversary, to beat the other, a war game, in other words. With bridge instead, the most important element is the mutual understanding existing with the partner and therefore it’s about communication, harmony, solidarity above all.

Bridge promotes the most unimaginable socializations between people of different age, sex, class, education, culture and characteristics. Bridge is regulated by ethical and practical rules, the respect of which represents the main aim of the game, and this aspect, especially for the younger players, is of considerable educational value.

Regarding young players, Bridge is able to offer a consistent help in refining their analytical skills, in a moment of fundamental importance in their formation, and to perfect, through constant verification, their ability to synthesize.

One finds oneself in the best conditions for feeling strong, determined and ready to face life and its many and varied challenges. Bridge is intrinsically effective in bringing out the best qualities in young players, it will help them to patiently accept the negative events and correct or eliminate all that can hinder, or even just slow down, their success.

The experience of teaching bridge in schools has given extraordinary results, enabling the social reintegration of kids who were particularly introvert, unresponsive to any commitment, unyielding to any socialising initiative.

Bridge is undoubtedly a discipline that can be indulged in by people with disabilities on a par with anyone else, without problems of any nature, without the need of particular alchemies, without the limitations of architectural barriers, that have aroused so much discussion.

People with disabilities measure themselves on a par with the fully able and do not feel disheartened by their condition and, above all, they can practice a discipline, also at competitive level without being isolated and marginalized together with their unfortunate peers.

Finally for the elderly bridge represents an opportunity to exercise their mental skills, often destined to diminish with retirement and the progressive lack of direct interests, but above all it offers the opportunity to be in contact with younger people, to talk to them, to be involved in their problems, to speak their language, to somehow feel similar to them, to overcome the terrible feeling of oppression which is the direct consequence of feeling “out of the game”.

Specific studies have highlighted how elderly people who play bridge have greater mnemonic and intellectual skills than those who don’t play.

Moreover, various scientific researches carried out and in particular that by the Sterling University, which is a fundamental theme of this meeting,  revealed extraordinary results: playing bridge helps to produce more T type lymphoid cells and, therefore, strengthens the immune system, which is what protects the body from harmful microorganisms.

Let me conclude saying that Since June 2001 the Secretary General  of the United Nations Mr. Kofi Annan  contacted the WBF President José Damiani to explore ways in which the United Nations and the world of sport can work more closely together for the benefit of people everywhere and particularly for the world’s youth, in order to identify tasks, programs and new initiatives that might benefit from collaboration between the United Nations and World Bridge Federation.

Thank you for the attention and good work.

To join the Conference, which runs from 28 June to 1st July go to : https://bridgemindsport.org/bridging-academia-policy-practice-conference/