In the six first board Israel added 9 IMPs, and Denmark 11 IMPs. Board 7 was the first significant difference. 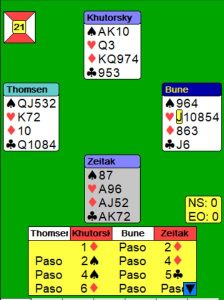 After a diamond opening bid, and an inverse minor answer, Israel headed easily and very fast to the diamond slam.

West won the first trick with his

K and returned a little spade. Declarer won with dummy’s ace, played three trump rounds finishing in his hand, and plyed a heart to the queen. Then came a club to the king, and the ace of hearts to get rid of dummy’s club loser and claimed his contract. Denmark at the other table chose to play 3NT and lost 12 IMPs.

Israel repeated thefeat in the next board. 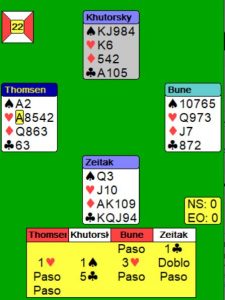 Zeitak (ISR) opened with a 1

bid and Thomsen (DEN) mentioned his hearts, Khutorsky was left with an esay way to show 5 or more spades with 1

. East jumped to three in his partner’s suit, and Zeitak doubled.

Khutorsky took the reins and closed the club game.

Declarer only lost two aces. At the other table Denmark chose to play 3NT but something happened on the way and went two down.

Israel hit again in the next board. 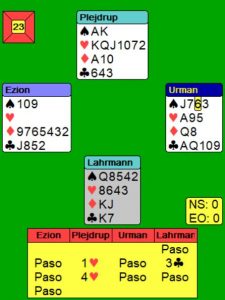 Israel was moving away.

25th September 2019
X
We use cookies to ensure that we give you the best experience on our website. If you continue to use this site we will assume that you are happy with it.Ok