In playing at no trump, it is often important to make the right decision on the question of which long suit to start working on first. Sometimes, as in today’s deal, it is necessary to work on two long suits “at the same time.”

HERE IS WHAT I MEAN. Mr. ‘Abel got the five of spades opening and won in his own hand with the king. He gave considerable thought to his next lead.

Should he go after diamonds or clubs first?

Diamonds were solid from the king to the eight. If one opponent had the ace of diamonds singleton or doubleton, he could not shut out dummy and four diamond tricks would be available.

Then, if Mr. Masters had the king and only one other club, three tricks would be available in that suit-enough for game. Not too good a solution, but anyway Mr. Abel led the jack of diamonds at trick two. He played low from dummy and the jack won. Next came the 10 of diamonds which also held.

OBVIOUSLY the dummy was now dead and Mr. Abel shifted to the ace of clubs and followed with the queen. Mr. Masters won with the king and returned a spade, clearing the suit.

Mr. Abel cashed three more club tricks but ended up with just eight tricks. He should have alternated diamonds and clubs as follows. At trick two lead the jack of diamonds and overtake with dummy’s queen.

Mr. Masters’ best play would be to duck. Now lead back a club and finesse the jack. Lead the 10 of diamonds and overtake with dummy’s king. Mr. Masters would have no winning defense. 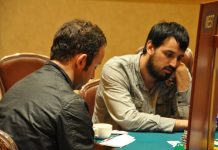 Aboard the Black Arrow by Fernando Lema

2nd November 2017
X
We use cookies to ensure that we give you the best experience on our website. If you continue to use this site we will assume that you are happy with it.Ok