All four categories of team play in the Funbridge World Youth Open Teams Championships — Juniors,Youngsters, Girls and Kids — are now playing semifinals to determine the matchups for the championship rounds coming up later this week. The Youngsters finished their round robin on Monday, the top four finishers moving to the semis. France led the way among the qualifiers from the round robin. They will be joined in the semis by Shengxing Team, China and Bridge Academy AZSUW. The ranks of the semifinalists include nine teams from China. Also on the schedule today are the Board-a-Match Teams for the non-qualifiers. On Wednesday, teams will play finals and playoffs for third. 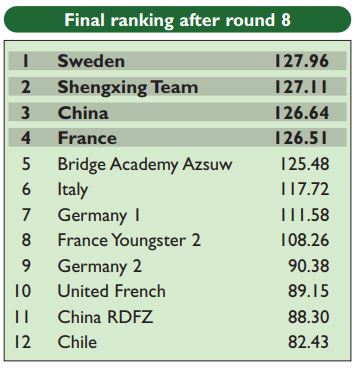