This was the very first match from the Youth World Bridge Teams Championships to be broadcasted in BBO. The match finished with a Japan Victory by 44 to 12 IMP.

These are some boards that contributed to Japan’s supremacy. 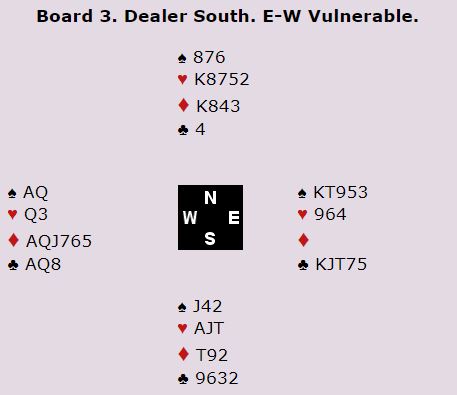 The heart lead immediately shatters the declarer’s hopes, but he was lucky to receive a diamond lead.

Declarer pitched a heart from dummy and covered the

J to continue cashing the

A to pitch another heart. He cashed the trump ace, and the ace and queen of spades.

Now he played a small club to dummy’s king, and ruffed a spade with his last trump. He lose a heart and claimed 12 tricks.

I dont know what North’s 1

was (a bluff?) but helped to stop China in the game level.

Declarer made 11 easy tricks but the board was a 12 IMPs lose. 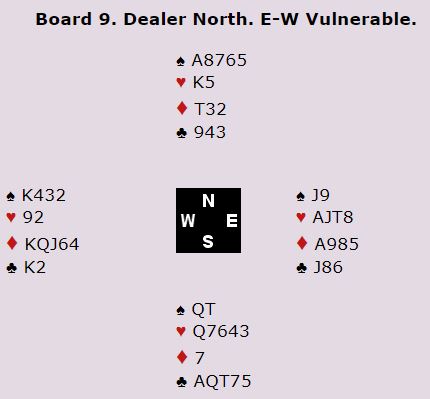 Declarer lose only two spades, one heart and one club, scoring +130.

In this room East’s 1

opening bid led them to the NT game.

A club or spade lead defeats the contract instantly, but South chose to lead from a small heart, his suit. And he was able to make three heart tricks, five diamonds and a club for 10 IMPs for his team. 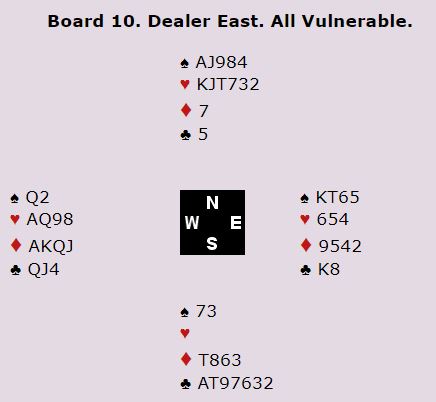 North must have regretted his vulnerable intromision.

West won the lead, and immediately switched to a trump, the

2. Declarer did well, playing the

West now continued with the

A, declarer ruffed but was endplayed and lose the rest of the tricks. Three down : 800 for Japan.

In this room South decided to open his hand with 3

, West said 3NT and this ended the bidding.

Yamada duck the lead and dummy’s

J won the trick. Declarer cashed his four diamonds, and continued playing the

Q, Hino covered with his ace to find out that he was endplayed. He chose to return the

19th February 2018
X
We use cookies to ensure that we give you the best experience on our website. If you continue to use this site we will assume that you are happy with it.Ok