On tuesday, 17 September, Sweden – Norway was the match in BBO that concentrated almost all the attention. The second day buletin appeared:

Teams from neighboring countries —Norway and Sweden — are leading the field in the Bermuda Bowl and surely are the betting favorites for at least the top three when all is said and done. Teams from the two Scandinavian nations have Bermuda Bowl wins on their respective resumes, as do some of the other contenders. 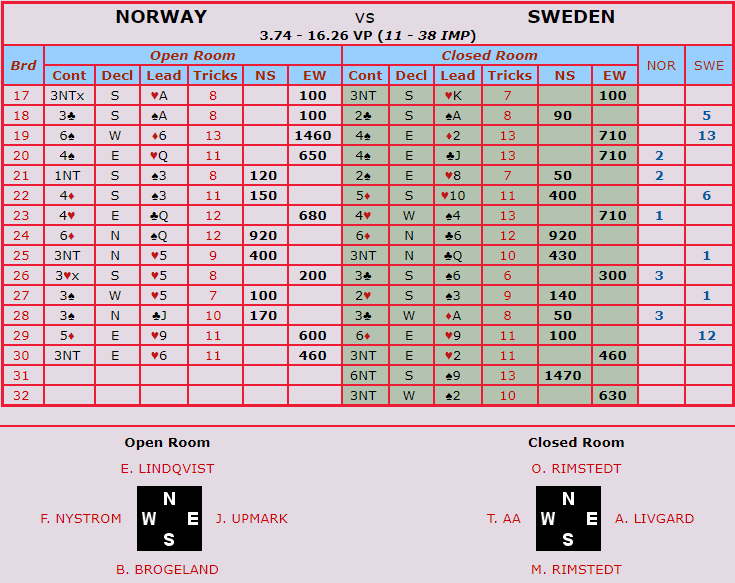 These are some of the boards that made the difference.

After a 1NT weak opening bid by South, AA doubled and North showed his weak clubs. When East discovered that his partner had majors (3

) he closed the spade game. A diamond lead helped declarer to make 13 tricks.

At the other table Upmark-Nystrom’s (click here for their CC) relay system entered in action and helped them to find the slam.

, but wasnt able to arrived to game later when his partner supported him. At the other table Livgard opened with 1

, South passed, and AA jumped to 3

. Rimsted in North doubled, and after East’s 4

AA – Livgard chose to play a diamond slam, impossible to make after Rimsted heart lead. Nystrom-Upmark stayed at the game level and had not problem to make their contract.

M. Rimsted opened 1NT, his brother asked majors. When they found out thay didnt have a major fit they played the NT slam.

At the other table after Brogeland 1NT opening bid, Lindquist used Puppet Stayman and when he find out they didnt have a major fit, chose to play the diamond slam. The heart lead to the ace and a heart return sealed the fate of the contract. One down meant 17 IMPs for Sweden and a big victory.