Today were played three more rounds of the Qualifier Round Robin.

In the Bermuda Bowl China achieved the pole position, followed by England and Poland: Click here for all the standings.

In the Venice Cup England achieved the pole position, followed by Canada and Norway: Click here for all the standings.

In the d’Orsi Trophy Chinese Taipei achieved the pole position, followed by India and Denmark: Click here for all the standings.

In the Mixed Teams England achieved the pole position, followed by USA 1 and Latvia: Click here for all the standings.

This was how the Bulletin 3 Journalists described the day:

In a day of wild matches and unexpected scores, teams from neighboring countries —
Norway and Sweden — are leading the field in the Bermuda Bowl and surely are the
betting favorites for at least the top three when all is said and done. Teams from the
two Scandinavian nations have Bermuda Bowl wins on their respective resumes, as do
some of the other contenders.
After the finish of play on Monday, Norway had a narrow victory-point edge in the
standings, with 86.66 compared to 85.27 for Sweden. England is third, followed by
Australia and USA 1. USA 2, 2017 Bermuda Bowl winners, are well back in the field in
19th place but cannot be counted out with so much of the tournament left to play.
Norway climbed into the leading spot with a series of blowout wins, including 78-7
over Guadeloupe and a 72-13 victory over China. In the Venice Cup, England is at the
top with 83.65 VPs. Leading the hopefuls in the d’Orsi Seniors Trophy is Chinese Taipei.
Mixed Teams leader is England. 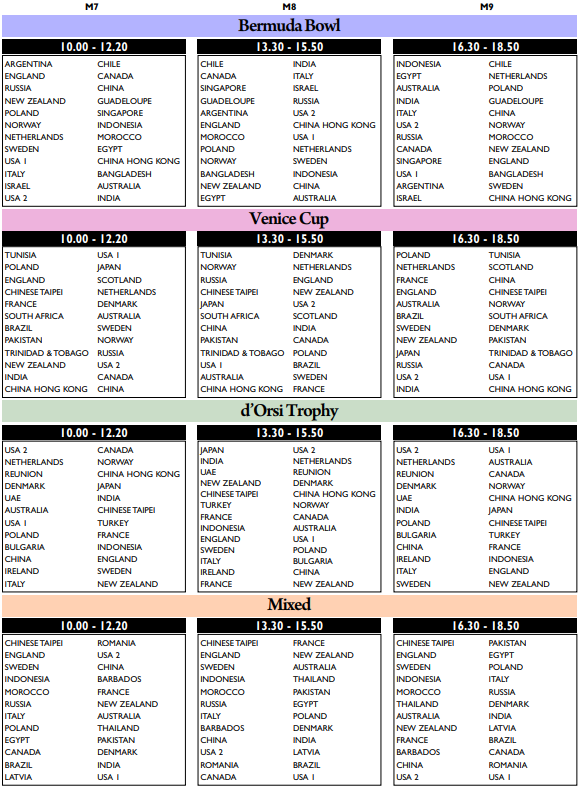 5th September 2020
X
We use cookies to ensure that we give you the best experience on our website. If you continue to use this site we will assume that you are happy with it.Ok