U26  Final: Netherlands vs SIVY B 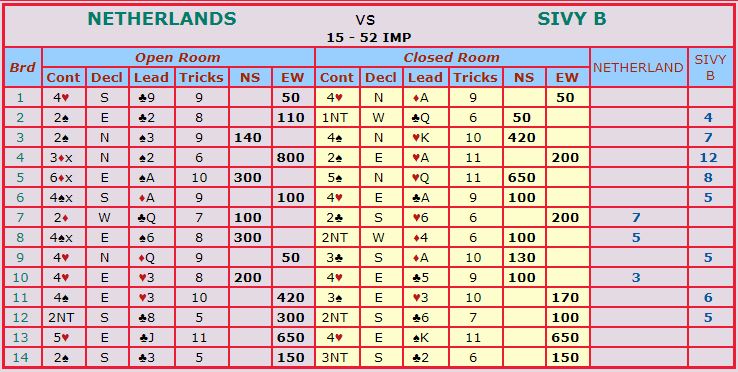 opening bid by South, his partner showed his spade suit and after Sprinkhuizen simple support everybody pass. Declarer made 9 tricks, losing one spade, one heart and two diamonds.

At the other table the bidding started the same way, but when North realized his partner’s support he immediately invited to game and the partnership arrived to 4

The declarer won the lead with the ace, and continued playing a small diamond to the

J, West won with his queen and returned a club. Youngquist raised with his ace, and played another small diamond to the

10. After winning the trick, he cashed the trump ace, and continued with a small spade. Coppens played his

J, declarer covered with his queen, and ruffed a club in dummy, cashed the

Q, and continued with a heart. West won the last heart trick and declarer claimed his contract. 7 IMPs for SIVY B.

opening bid, North doubled and the N/S pair arrived to the 3

contract doubled by East. The declarer could not stop losing two spades, one heart, three diamonds, and a club paying +800. At the other table although E/W had a game in spades they only played a spade partscore but they not only weren’t punished they collected 12 IMPs in the board.

After two pass, Mendes de Leon opened 1NT (weak), East showed his spade suit, and the pair arrived to the spade game. After a heart lead declarer lose one club and two diamonds making his contract. At the other table N/S didn’t arrive to the spade game and paid 6 IMPs for their choice. 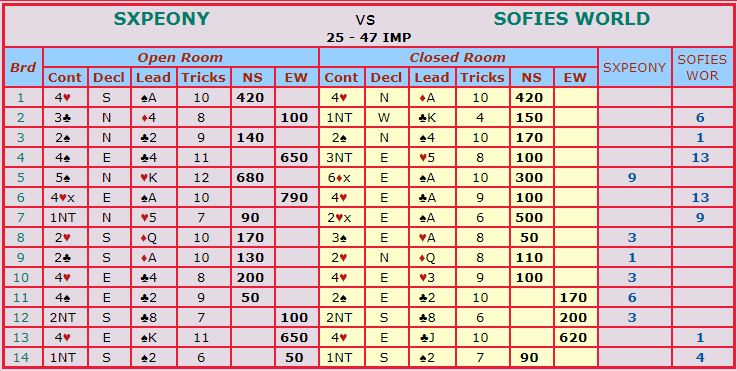 , and Oeberg doubled. Yu chen continued with 1NT, and Indebro showed her heart suit. South informed her partner her minimum hand with a pass, and Oeberg showed her strong hand bidding diamonds. Now North supported spades, East showed weakness with her pass, and Oeberg repeated diamonds at the fourth level (doubled by Ruan). Indebro with a diamond void, chose to escape to 4

A and although watching a singleton spade in dummy he played a second spade. Declarer ruffed the second spade and discard two club losers in dummy’s high diamonds.

She continued ruffing a third diamond in her hand and ruffed another spade loser in dummy. Finally she ended losing, one spade, one heart and one club for +790.

At the other table the defense was relentless, the lead was a club and when they had the opportunity they played a heart to prevent ruffs in dummy. Declarer ended one down and Sofies World added 13 IMps to their scorecard.