In the fourth round of the U 26 Open Category Australia faced Natt (an England team). 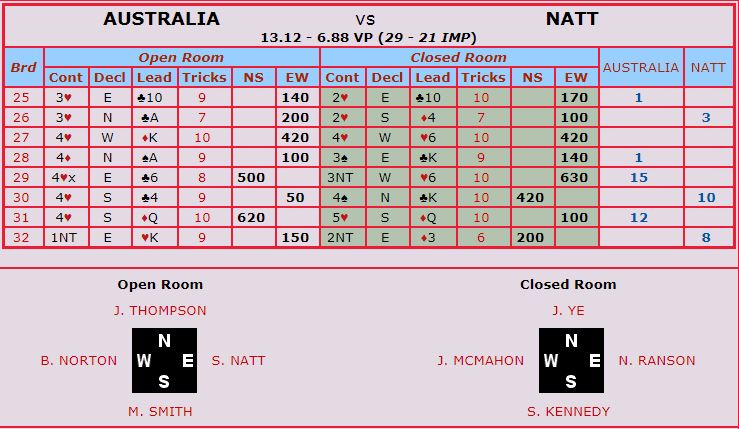 The first boards only produced a couple of IMPs, but Board 29 generated a huge swing.

In one table after two pass, Smith (AUS) opened with a 4

bid, and Norton (Natt) decided to double, a pass by Natt would have generated a good result for his team, but with 4-4 in the majors and not much defense he chose to mention his hearts. This time was Thompson’s time to double. Two down meant +500 for Australia. At the other table, Kennedy opened at the three level, that helped Mcmahon to say 3NT, easy to play: + 430. So in this board Australia added in both tables obtaining 15 IMPs.

, and his partner answered 1

, Ranson in East showed the minors, after South pass, Mcmahon (no vulnerable vs vulnerable) jumped to the fifth level, and Ye chose to play instead of double, so the Natt team arrived to a 5

Q lead let declarer with no posibilities and he went one down. At the other table Smith (AUS) had an easier bidding and could play at the fourth level making his contract for 12 IMPs.

Australia continued in the pole position:

27th March 2019
X
We use cookies to ensure that we give you the best experience on our website. If you continue to use this site we will assume that you are happy with it.Ok