After finishing the excitement of the definition for the first medals of the 6th World Youth Open Championships in the Pairs Champonships, all the young players are now concentrated facing the Teams Championships. In the first round of the U 26 Open Category the Team Italia faced the Natt Team from England. 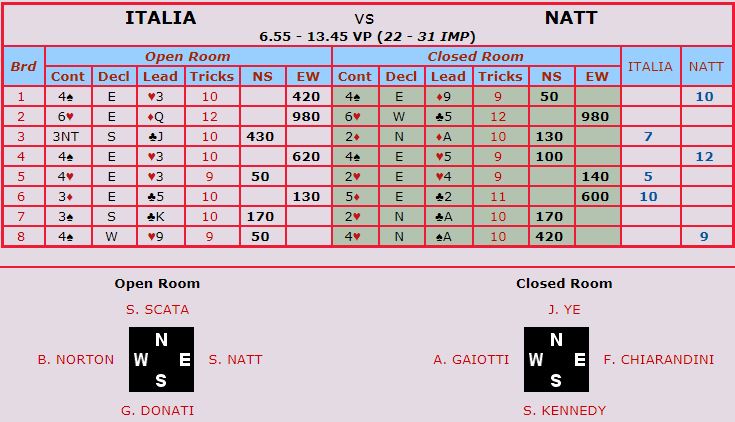 Board 1 produced the first significant swing, when Scata-Donati did not develop the proper defense to defeat a spade game.

After North and East Pass, Donati opened his hand with 1

, Natt mentioned his spades and Norton decided to play game closing the bidding. 4

was a reasonable shot but had no play as the minors lied.

Low from dummy, Scata played the

10 and Natt made the first trick with his

J, to play the

2 to the queen. He continued with the

A, watching Scata pitching the

7, and after winning the trick he switched to the

A, and afterwards switched again to the

2, and declarer played his

K! creating a possibility for the declarer…that he did not lose.

10 and left his hand with a small club, Natt played a small club too, and Donati contributed with his Ace and returned another club.

10, and Natt won with his king, to continue with his last trump to pitch the

Q from dummy and claimed 10 tricks.

The other table also played the same contract, but the defense was relentless and finished one down…10 IMPs for team Natt.

Board 3, generated the next difference.

was a forcing game response. Finally N/S arrived to 3NT. The defense needed a heart or diamond lead to defeat the contract but West chose a club and Donati arrived to his goal, making 10 tricks. At the other table N/S played a diamond partscore that cost them 7 IMPs.

Next Board produced another big swing:

Both tables arrived to the 4

, perhaps is interesting to see that in one table Norton passed after his partner’s 1

opening bid, but got saved when Scata reopened the bidding. Donati made 10 tricks. At the other table Gaiotti re-evaluate his hand with 4 cards in his partner’s suit, plus

J9 and support his partner, they easly arrived to the game, somehow in their way to make their contract something was wrong and were down one, 12 IMPs for Natt. (You can play the hand above to see what happend).

More swings in other hands get the match to end Natt 31 IMPs – Italy 22 IMPs.