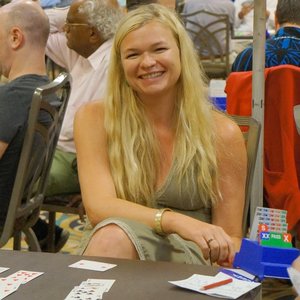 This is a note from Christina Lund Madsen when Anders was only 8 years old and played with his father the Nusa Dua Bali Pairs Championship in Bali.

A Bridge star to be By Christina Lund Madsen

By the end of the most prestigious event of these championships, the Nusa Dua Bali Pairs, a crowd gathered around one of the tables, all taking pictures of the mysterious player. I went to see if Obama had arrived early to try his luck at the bridge table. Sitting on one side of the screen was Anders, 8 years old (and a half), playing with his father Boye Brogeland and in this moment declaring a NT-contract against an Indonesian senior pair.

Having won the first 3 tricks, the defense took the following seven. As the 11th card was played, Anders confidently showed his cards, claiming the last three tricks. After the picture taking and autograph writing was over (Boye Brogeland spelled his name two times to an Indonesian lady, eventually realizing she was not asking for the former World Champion’s name, rather his son’s), Anders climbed up on a chair and while hugging his son, Boye explained Anders how had he not taken the first heart but played a low, he would have gotten 11 tricks in his NT-contract instead of six.

Anders attended one of his father’s bridge classes one year ago without having played bridge before, but he has played other card games and, according to his father, knows how to take tricks. This summer he attended a junior camp in Norway, playing 69 boards a day, then switching to other card games. In his first international event he finished at 48,24 %, beating a number of prominent names, which we have promised the Bulletin super star Brian Senior not to mention.

With 4-5 rounds to go, the father and son were at more than 60 %. In one round they played this year’s Spingold champions Jacek Kalita – Michal Nowosadzki. To put it in Kalita’s words: “They are killing us. Boye’s son beat us!” Not an exact description, since he accidentally let through 7hearts on the first board, however on the second board the Polish stars doubled 4 spades, perhaps after a somewhat shaky bidding, only to see Brogeland senior confidently land the contract.

How is your dad playing?
“Bra.” (good in Norwegian)

Is he yelling at you while playing?
(Eagerly nodding, his father using the classic phrase ‘I am just trying to teach you something’)

Is your mother yelling at you? (Tonje Brogeland of the Norwegian women’s team, slightly more edged than her mild-natured husband)

(Heavy nodding, his father eagerly supporting his son’s “Yes, mommy surely yells more than I do”)

Do you want to be a bridgeplayer?
Anders smilingly nods.

What is Bridge2Success? by Ela Tomczuk

“Take Out Double” a lesson from Andrew Robson