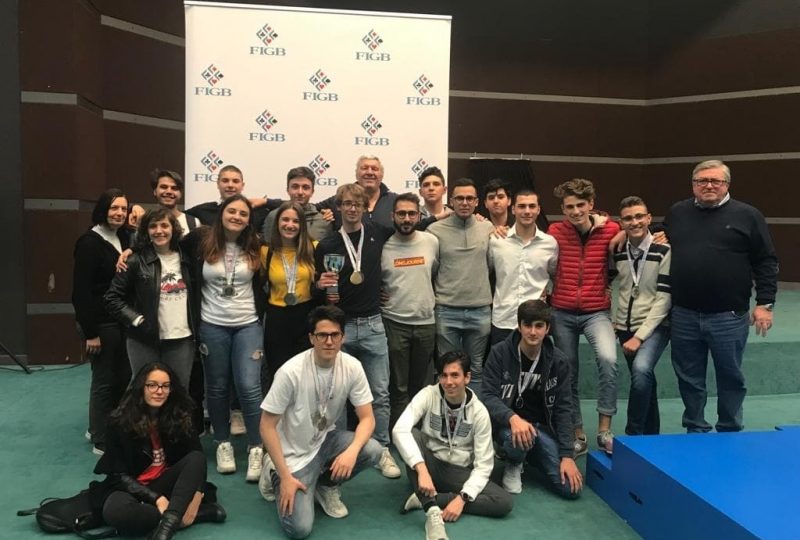 Bridge has a future, only if the circles are filled with young people. But the young will come forward only if you go to spur them on in their environment to teach them all those methods that, besides making it appear intriguing, can also become a stimulus, aggregation and growth.

This was thought by the leaders of the Associazione Bridge Latina when they signed an agreement with the scientific G.B.Grassi some years ago.

A decision supported by studies and experiences from other countries that have shown that this training course is really valid.

“Teaching bridge to kids – says Andrea Fiore, instructor – is a gift that is given to them and they will remember for a lifetime, allowing them to make many new friends and have fun, developing their mental abilities”.

“Body and mind are crucial elements in our lives and in sport they are combined – says Walter Vigna, an instructor himself – I am convinced that muscular commitment is no less important than the cerebral one. To put it briefly: bridge is really an all-round sport ”.

Without thinking its characteristic of being a game, for the student it appears to be an important element for the conquest of sociality; it helps to improve relationships with everyone, comrades and teachers and to create a collaborative climate and the respect of the rules help to acquire the character security, through dialogue and the necessary communication and to keep at bay, the so-called performance anxiety.

Here, therefore, from the premises of a few years ago, the success of this year at the Italian under 26 bridge championship at school, which was held in Salsomaggiore Terme. A job that has paid off in a game that lives on lights and shadows.

The lights, of course, cannot be anything other than the successes, the podium, the victories and the triumphs. The shadows are all those niche jobs that serve to make all these things happen and come true. And therefore they are the instructors who help to make the game grow in technique and safety, who tomorrow will become .. “light”.

Is it not said… working in the shadows? In fact, behind every champion there is a great work of people who do not appear, but who are there. And so behind the gold, silver and bronze that the Grassi high school students have won, there is the work of those who prepared, followed and supported them. And then Andrea Fiore, Walter Vigna and Roberta Censi, who believed and maximized their abilities towards a game, which is certainly not easy. Even if everything starts as usual. With a bit of challenge, some curiosity and the test with yourself. Without in the least imagining that these three elements could one day make you climb the steps of a podium.

But if the merit is of the one who teaches, no less important is the determination of the boys, who started off in a group and dealt with the thousands and more colleagues from all

De Prizio & Esposito, in their twenties, won the silver medal in the game in pairs, coming close to gold. A difference of 0.23 has separated them from the top step. Mappelli and Cosentino also went up for the bronze on the same podium. In the two steps of the podium then the same school.

In the team game, same thing. The team formed by De Prizio, Esposito, Mappelli and Cosentino won the bronze for the Sports Start-up Centers.

For the Bridge team at school, the team received the silver medal: De Muro, Giacomini, Nardecchia and Meuti.

The Associazione Bridge Latina was awarded as the best bridge school under 26. And finally gold. Mappelli and Cosentino won the Butler ranking, which rewards those who played better throughout the tournament.

A success of this kind cannot be archived, because this responds fully to what the Miur wanted. In fact, bridge has been in school classrooms for over twenty years. The Ministry of Education, University and Research, has signed a memorandum of understanding with the National Federation to introduce it to support teaching.

Gianna Bellardini, principal of Grassi, is satisfied. His is the first and only school in Associazione Bridge Latina where courses are held to learn how to play bridge. “Last year the courses were also included in the alternanza school-work project, he adds, and the boys fell in love with it so much that many remained even at night. Of this I obviously have to thank the Bridge Association and the instructors “. Already. Nothing could have happened without the great commitment and determination of the masters Fiore, Vigna and Censi. “The boys were very good,” said Roberta Censi, president of the ABL, who followed all the steps of these guys, continually stimulating them and emphasizing: “Some of them have been playing for only 6 months and others play very little during the year . Despite this they went on to the prize “.

Making young people aware of this game is encouraging their growth, strengthening their skills and discipline, with the certainty that over the years, they can only improve. With the Bridge the bonds are strengthened and new ones are created. You reason with others, discovering new understandings and new balances. And someone, but we don’t say this very strongly, also cites scientific studies that show that those who practice Bridge have a reinforced immune system.

University Bridge in the World